EU wind power is being hit by the economic crisis 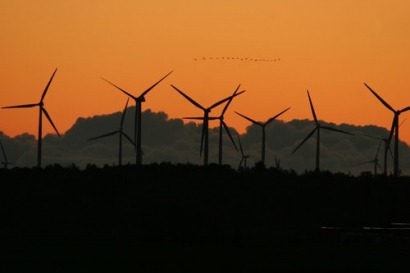 The European wind power sector is being affected by the economic crisis and the policy of austerity intended to counter it, senior wind industry figures in Vienna warned recently. They warned Europe’s politicians that the situation should not be made worse by policies that act to undermine investor confidence in the sector.

The warning was delivered at the opening of Europe’s leading wind energy event – EWEA 2013. Politicians and high level industry executives appeared at the conference speaking of the need to secure further growth in the sector following expiry of the current 2020 renewable energy target. They also commented on the present wide disparity between fossil fuel and renewable energy subsidies.

Professor  Arthouros Zervos, President of the European Wind Energy Association (EWEA), criticised “sudden or retroactive changes to support schemes” and advised that “the wind industry can be a driver for growth, for jobs and exports but not if government policies drive away investors.” He informed delegates that “the wind industry is suffering serious job losses, and will suffer more difficulties this year” and called for binding renewable energy targets for 2030 as a means of increasing investor confidence. However, the professor also predicted that the long-term prospects for European wind will be very bright and will be the leading power technology by 2050.

IEA Chief Economist Faith Birol pointed out that global fossil fuel subsidies of around $523 billion in 2011 are encouraging carbon emissions worth $110 per tonne, compared to renewable energy subsidies of $88 billion. He identified fossil fuel subsidies as “public enemy number one” and also acknowledged that the unpredictability of government policy was a major concern for the wind sector.

“Many are the challenges that the European wind industry will face at the domestic level, which require attention now” said Francesco Starace, CEO of Enel Green Power and Chair of EWEA 2013. “EU energy policy after 2020, the further development of electricity infrastructure, the competitiveness and integration of wind energy in the electricity market, are among the most pressing. Furthermore, for preparing a proper future the present should be adequately dealt with, and therefore, for reaching the 2020 targets, EU Member States have to guarantee efficient and reliable renewable energy policies.”

Mr Starace agreed there exists “very interesting potential for renewable energy and in particular for wind in eastern Europe and the Balkans, the Mediterranean basin, and emerging markets like central and south America and Asia. The expertise developed in decades of European industry leadership needs to be used exploring business opportunities at the periphery of, as well as outside, the Old Continent.”