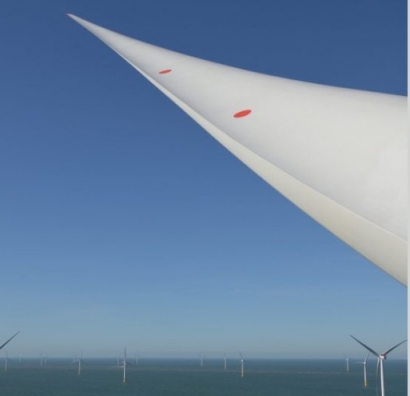 The project consists of 56 Siemens Gamesa 6.3 MW turbines as well as 56 buried subsea array cables linking the turbines to the offshore electricity platform.

Galloper is owned by innogy SE (25 percent), Siemens Financial Services (25 percent), Sumitomo Corporation (12.5 percent), ESB (12.5 percent) and a consortium managed by Green Investment Group and Macquarie Infrastructure and Real Assets (25 percent). Innogy SE has led the development and construction of Galloper Offshore Wind Farm and will operate the wind farm on behalf of the project partners.

Construction of the 353 MW wind farm created 700 jobs, with the foundations installed at a rate of four per week and all 56 turbines constructed in just one season – both firsts for innogy on a project of this scale. Galloper will run for over 20 years, making a significant contribution towards the decarbonization of the UK’s energy supply. The amount of green power the wind farm is expected to generate on average each year is approximately equal to the annual electricity needs of more than 380,000 UK households.

At the ceremony, Bünting said, “Offshore wind is now a key industrial sector for the UK and offers particular opportunities to key regional hubs, such as East Anglia – the home of both Galloper’s construction base and its operation and maintenance facility.

“With all our projects, we always strive to invest in local businesses and during its operating lifetime, almost 60 percent of the investment in Galloper is expected to go to UK companies.”

Galloper Project Director Toby Edmonds added, “Seven hundred jobs were created during construction, a team of 60 will operate the wind farm and it is also supporting many long-term jobs through our local suppliers. Galloper was a great team effort with main contractors: Siemens Gamesa , GE and Petrofac, VBMS, NKT, GeoSea and National Grid; plus the myriad of national and local suppliers all contributing to ensuring the wind farm was built with such awe-inspiring speed and efficiency and importantly, with an exemplary safety record of no significant injuries.”

“As an investor in the Galloper Offshore Wind Farm, Siemens Financial Services is excited to see the successful inauguration of this project,” commented Kirk Edelman, CEO of Energy Finance, Siemens Financial Services. “Having been involved with the project since its development phase, this is a significant milestone that we are proud to be part of.”

Earlier this month it was announced that the authorities had given the go ahead for the construction of the Galloper Operations & Maintenance base in Harwich International Port, Essex, enabling local contractors to get underway and with the potential to create 120 local jobs during construction.