Thursday, 19 May 2022
0
Robin Whitlock
At the North Sea Summit in Esbjerg, Denmark, yesterday (18th May), Heads of Governments from Denmark, Germany, Belgium, and the Netherlands have taken an enormous step toward reaching the EU’s climate neutrality goal by co-signing a joint declaration that will make the North Sea a green powerhouse for Europe. Together, the four countries want to harvest at least 150 GW of offshore wind in 2050. 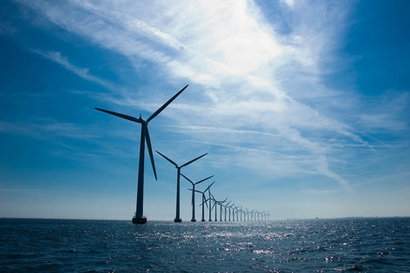 Russia’s invasion of Ukraine has left the EU in a new geopolitical situation and the need for sustainable solutions and more renewable energy is more urgent than ever. At the North Sea Summit in Esbjerg, the German Chancellor Olaf Scholz, the Netherlands’ Prime Minister Mark Rutte, and the Belgian Prime Minister Alexander De Croo co-signed a joint declaration with the Danish Prime Minister Mette Frederiksen that sets an ambitious target to quadruple the four countries’ total offshore wind capacity by 2030 and increase the total offshore wind capacity to at least 150 GW by 2050.

“This summit truly is historic” said Danish Minister of Climate and Energy, Dan Jørgensen. “Today, we opened a new chapter on renewable energy in Europe and delivered an ambitious declaration that will get us closer to achieving the EU’s climate goals. Not only that, these commitments made in Esbjerg will also help Europe become independent from fossil fuels in a sustainable way. With this green leap, the North Sea will become a renewable hub for Europe and provide power to millions of Europeans.”

Additionally, each country’s energy minister attended the North Sea Summit along with the President of the European Commission, Ursula von der Leyen and the Commissioner for Energy, Kadri Simson. The Ministers of Energy signed several bilateral declarations that cover ambitions on green hydrogen and the establishment of more energy islands in the North Sea. Denmark and Belgium signed an agreement that confirms the linkage of the energy island to Belgium in 2033.

“Today is a historic day for Europe and for Belgium” added Tinne Van der Straaten, Belgian Minister of Energy. “Together with Denmark, Germany and the Netherlands, Belgium is taking the lead and joining forces to make the North Sea the largest Green Power Plant of Europe. Energy is today used as a weapon and our families and businesses are the victims. With this green acceleration we can replace gas and oil, especially from Russia, faster with wind at sea and green hydrogen. In this way, we will increase our energy independence and reduce our bills. Belgium is accelerating the energy transition by quadrupling offshore wind in the Belgian North Sea, a hybrid energy island and interconnections with neighbouring countries.”

Earlier in the day, the Commission President presented the RePowerEU plan of becoming independent of Russian gas. All of the declarations signed at the North Sea Summit will help the EU achieve its comprehensive energy transition.

The Joint Declaration entailed a goal of reaching a combined offshore wind target to at least 65 GW in 2030, and to increase total current capacity 10-fold to a minimum of 150 GW by 2050.

The Ministers of Energy signed a declaration which, among other things, covers:

Cooperation on connecting and maximising capacity on the first energy island

Work for faster approval processes both nationally and in the EU and ensure more EU funds for offshore wind projects to reduce risks for investors.

Denmark and Belgium signed an agreement on sale of Danish renewable energy-shares to Belgium. The agreement confirms the establishment of a ‘hybrid interconnector’ in the North Sea from Belgium to the energy island in 2033.

The Netherlands and Denmark signed a ‘Ministerial endorsement’ to analyse a specific configuration for connection between the Danish energy island and a Dutch offshore energy hub.

Germany and Denmark signed a Letter of Intent to initiate bilateral cooperation on green hydrogen based on renewable energy both onshore and offshore.