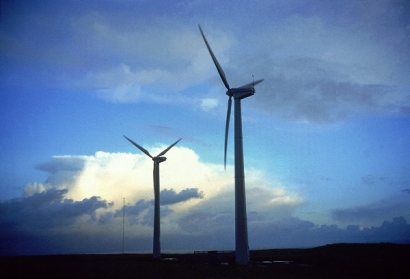 The project, located in Reno County, Kansas, is anticipated to have 80-84 turbines when completed and generate an expected 220 MW. With this agreement, coupled with other recent green power purchases, Iron Mountain expects to exceed 75 percent global renewable electricity usage in 2018, and move the company closer to its goal of 100 percent renewable power by 2050.

"Renewable energy has become a key strategic component in how we manage electricity usage throughout our global real estate portfolio," said Kevin Hagen, vice president of Environmental Social and Governance Strategy, Iron Mountain. "This agreement with NextEra Energy Resources is a critical next step towards achieving our goals for utilizing renewable energy for 100 percent of our global portfolio.

"We are excited to partner with Iron Mountain to help the company achieve its next milestone along its renewable energy journey," said John Di Donato, vice president of Development for NextEra Energy Resources.

The project should create more than 250 jobs during construction, which typically lasts between six and nine months. Once operational, by the end of 2019, Pretty Prairie Wind is expected create between 15-20 full-time jobs. Over its first 30 years in operation, the project will generate an estimated $50 million in payments to local landowners, as well as millions of dollars in additional tax revenue to the local community.

Iron Mountain is committed to environmental responsibility. Following the execution of its first North American PPA in 2016, it has expanded its focus to pursue global renewable energy opportunities across its operational and real estate portfolio. The company recently announced that its operations in Belgium, Ireland, the Netherlands and the United Kingdom have reached the goal of 100 percent renewable energy usage. Earlier this year, the company joined the RE100, formally committing to achieve 100 percent renewable power by 2050.

"This deal is further proof that scaling up renewable energy is achievable and cost-effective for global companies of all sizes," said Marty Spitzer, Senior Director of Renewable Energy at World Wildlife Fund. "With the help of the Renewable Energy Buyers Alliance, buyers like Iron Mountain have switched into high gear on their journey toward 100 percent renewable energy and are reducing emissions in line with the urgency of the climate challenge."