Tuesday, 16 April 2019
0
REM
The Arkona offshore wind farm, a joint venture between E.ON and Equinor, went into operation with a festive event in the port of Sassnitz-Mukran on the island of Rügen. German Chancellor Angela Merkel, Mecklenburg-Vorpommern’s Prime Minister Manuela Schwesig and Norway's Minister of Energy and Petroleum Kjell-Børge Freiberg launched power generation together with E.ON CEO Johannes Teyssen and other guests of honor. 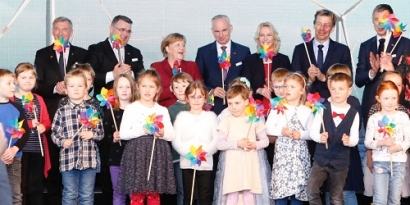 The Arkona project is located 35 kilometers northeast of the island of Rügen, Germany. The wind farm has an output of 385 MW and can potentially supply around 400,000 households with renewable energy.

Chancellor Merkel said, “Arkona sets a standard for the transition of the energy system. We will discuss how we achieve the climate goals. It is not sufficient to convert energy production. We see great potential in the heating sector. We are also facing a major change in the transport sector.”

Prime minister of Mecklenburg-Vorpommern, Manuela Schwesig, added, “Today we are sending out a strong signal: we are making progress with the energy revolution. Offshore wind power is a crucial element here. This is a path with a future. It is a path we are taking together with strong partners like E.ON and Equinor.”

The investment volume amounts to €1.2 billion. Compared to conventionally generated electricity, Arkona saves up to 1.2 million tons of CO2 annually. Sixty turbines of the six-megawatt class from Siemens Gamesa were installed.

The guests of honor put the Arkona offshore wind farm into operation with the support of children from the kindergarten Kunterbunt from Sassnitz. 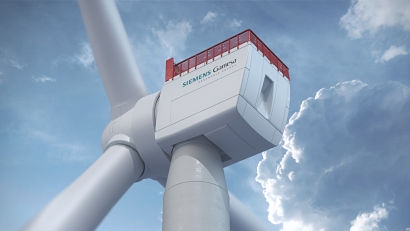