Friday, 10 February 2012
0
REM
Iberdrola Engineering, in a consortium with Gamesa, has started up the Cerro de Hula wind farm in Honduras, the largest in Central America. This new facility has a capacity of 102 MW and its official opening is scheduled for the second half of February. 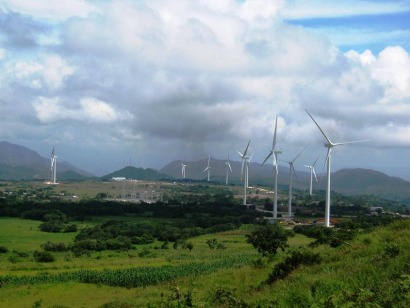 This is the first wind farm to be built in Honduras, and its entry into commercial operation will increase the country's total installed capacity for energy production by 10%.

In addition to underlining a clear commitment to sustainable development, given that it provides a source of clean energy, this new facility also represents an important advance for the region, bearing in mind that certain sectors of the Honduran population still have no electricity supply. The Cerro de Hula wind farm is the result of a 200 million dollar investment.

Honduran President Porfirio Lobo Sousa laid the foundation stone for the wind farm at the end of January 2011, during a ceremony attended by a number of state dignitaries, along with US Ambassador Hugo Llorens and Spanish Ambassador Luis Belzuz. The wind farm is located 24 kilometres south of Tegucigalpa, on Cerro de Hula and Izopo mountains in San Buena Ventura and Santa Ana, in the department of Francisco Morazán.

The facility's owner is Mesoamérica Energy, a company that is active in the development of renewable energy projects in Central America through its local subsidiary Energía Eólica de Honduras (EEH). The contract to build the Cerro de Hula wind farm was a "turnkey" contract which also included maintenance services for a period of two years following start-up. The new wind farm is equipped with 51 Gamesa G87-2 MW wind turbines.

Iberdrola Engineering, a world leader in the construction of wind farms, is currently building wind energy facilities in Spain, Mexico, the USA, France, Brazil, Romania, Kenya, Bulgaria and Poland. In this last country, the company was recently awarded its tenth wind farm project, an 82 MW facility, in a contract worth €135 million.