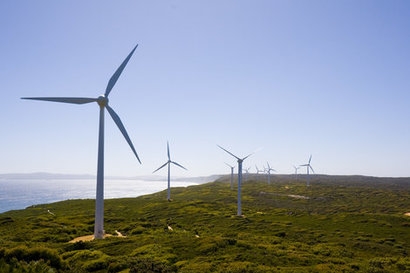 Menard, international experts in ground improvement, drew on 20 years of experience in using its Controlled Modulus Columns (CMC) technique to support the successful development of the $280 million Granville Harbour Wind Farm in Tasmania.

Menard developed the CMC process in the 1990s as a cost effective and less invasive alternative to piling for major construction projects. It has since been implemented in hundreds of major projects worldwide including Optus Stadium in Perth, Webb Dock Redevelopment in Melbourne and the Boeing Building Expansion in the United States, to overcome settlement problems in highly compressible and organic soils.

Dave Raftery, Business Development and Project Manager for Menard Oceania says despite years of experience in the CMC process, it was the first time it had been applied to support a wind farm development in Australia.

“The variability of the ground meant we needed a unique approach for supporting each of the 31 turbines” said Mr Raftery. “We proposed CMC because we knew how successful it has been for wind farm projects in Europe and the USA. The technology is also more cost effective and able to be installed faster than traditional piling solutions. It started with a nine-hour ferry journey to the north of Tasmania, and then we took them by truck on one very hilly, winding rural road. We took the advance precaution of reinforcing some of the bridges we needed to use”.

The wind farm, once complete, will provide 112mw of clean, renewable energy annually for 46,000 households . It forms part of the Tasmanian Government’s goal to make the state 100 per cent self-sufficient in renewable energy by 2022.

Despite a relatively short timeframe between being awarded the contract and initiating work, Menard’s emphasis on thorough planning ensured the team was well prepared to overcome challenges during construction, implementing contingencies when necessary, which kept the project on track.

Ironically, one of the biggest hindrances to the project came from strong winds which, along with wet, muddy roads, made accessing the site difficult at times.

Menard’s work on the wind farm, which is located on a working cattle farm, was completed in July enabling the follow-on works to continue on schedule. In addition to the cost and time efficiencies it provided, Menard’s CMC solution had a much lower environmental impact than traditional piles.