Friday, 01 June 2012
0
REM
Vestas has signed a joint agreement with a global leader in methanol production to collaborate on global and regional wind development during an official ceremony yesterday in Punta Arenas (Chile). Methanex hopes that the agreement with increase energy security for its methane production chain. 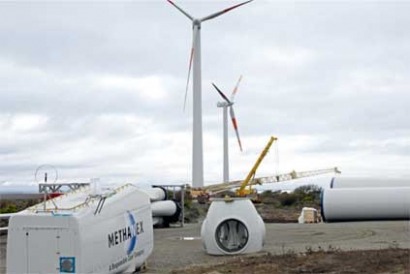 Two years ago, Methanex used Vestas technology to develop the Cabo Negro wind farm in Magallanes (Chile) in order to increase its energy security and ensure more sustainable operations through the use of clean energy. Methanex’s decision to invest in wind was motivated by the excellent wind resources in the region, together with its corporate commitment to sustainability.

This latest agreement between Vestas and Methanex defines the framework for further cooperation between both companies to establish a baseline for the development of future wind projects in/or around Methanex´s global production facilities; to support and advise Methanex in the development of new wind projects around the world; and to help build a robust renewable energy regulation in the Magallanes Region – contributing to the diversification of its energy mix.

Methanex facilities in Chile are located in the Region of Magallanes, where the company plays a key role in the community. “The success of our wind energy farm in Magallanes demonstrates the role that wind energy can play in the regional energy matrix. The agreement with Vestas should contribute to establish a robust regulatory framework to incentivize wind energy in the region,” explains Paul Schiodz, General Manager, Methanex Chile.

“Producing methanol is an energy intensive process. With the Cabo Negro wind project, Methanex has shown both their creativity in finding a business model that reduces its consumption of natural gas and their commitment to act in an environmentally responsible manner. We are very proud that Methanex has decided to take this partnership with us to the next level. It is Vestas’ wish to become Methanex´s global partner on wind energy solutions,” adds Morten Albæk, Vestas Global Senior Vice President, Global MarCom & Customer insight.

Methanex is the world's largest supplier of methanol to major international markets in North America, Asia Pacific, Europe and Latin America. In 2010, it inaugurated its first wind farm called Cabo Negro which includes three Vestas V52-850 kW turbines with a combined capacity of 2.55 MW connected to the internal generation system at the Methanex plant, increasing its capacity from 36 MW to 38.5 MW.

The capacity factor of the wind farm in 2011 was 53 percent, which represents an estimated annual production of 10,722 MW. This wind power plant produces clean energy and contributes to making Methanex’s operations cleaner and more sustainable, saving approximately 12,204 metric tonnes of carbon dioxide per annum.

“Methanex has demonstrated the potential that wind energy has for Magallanes, a region increasingly dependent on scarce natural gas supply. This agreement, amongst others, is an excellent opportunity to put our strengths to work together for a better energy regulation in Magallanes,”  Marcelo Tokman, Vice President, Vestas South America (excl. Brazil), ends.