Thursday, 17 November 2022
0
Robin Whitlock
Independent renewable energy company RES is delighted with the success of its four-week pre-application consultation for the 17-turbine Hill of Fare wind farm to the north of Banchory in Aberdeenshire, Scotland, which closed last Friday having generated record levels of feedback. 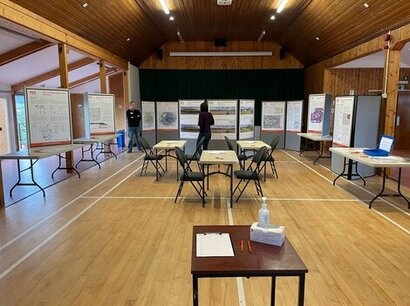 The consultation was initiated by public exhibitions in mid-October which attracted more than 370 people across four events. It has since generated more than 360 comments forms – one of the largest number of responses ever received by RES to a UK onshore wind farm proposal.

“We are delighted with the levels of engagement received from the community as we wanted to consult early with people on the proposals to maximise the potential for their comments to influence the design over the coming months” said Gavin Shirley, Development Project Manager at RES. “Onshore wind, together with large scale solar and offshore wind, is the cheapest form of electricity generation, and projects like Hill of Fare can play an important role in not only helping to tackle the climate change emergency but also the cost of living crisis. Onshore wind provides sustainable, low-carbon electricity which can be deployed quickly and delivered at lower costs than other technologies. After we have finished reviewing the consultation feedback our project team will carefully consider people’s comments in relation to the design, together with the technical and environmental survey work and key consultee responses. We would like to thank all those who took the time to share their feedback with us.”

RES seeks to be a power for good in communities that neighbour its projects by working openly and constructively to ensure tangible local benefits and there are a number of ways that this can be achieved. As part of the recent consultation, RES has begun to seek feedback on ideas for a tailored package of community benefits including priority projects that people would like to see supported or delivered should the Hill of Fare Wind Farm proposal receive consent. The project team will continue to work directly with the community to understand how the wind farm could support the local area and help to secure long-term economic, social and environmental benefits.

If consented, Hill of Fare Wind Farm would be capable of generating enough clean, low-cost electricity to meet the annual demand of around 90,000 homes. In addition, the scheme is currently predicted to deliver approximately £4.7 million of inward investment into the area in the form of jobs, employment, and the use of local services - as well as approximately £1.1 million in business rates payable each year to Aberdeenshire Council during operation.

A second set of public exhibition events will be held closer to submission of the planning application, which is currently scheduled around spring 2023, to update people on the proposal and present the final design. These events will be advertised in advance and provide people with the opportunity to speak to the project team again and provide written feedback to RES.