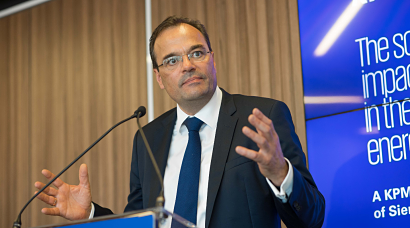 Accelerating the uptake of wind energy would slash pollution, save lives and preserve vital water resources, according to a new report from KPMG commissioned by Siemens Gamesa Renewable Energy, a leading wind energy manufacturer.

The KPMG wind energy report — The socioeconomic impacts of wind energy in the context of the energy transition — highlighted significant gains for society through the delivery of clean energy. The report found that wind could increase its contribution to global electricity demand nine times by 2040 (to 34 percent, from 4 percent at present). Moreover, it could account for 23 percent of the necessary reduction in carbon emissions by 2050: 5.6 billion tons of CO2, equivalent to the annual emissions of the 80 most polluting cities. This reduction would have real benefits for society, saving up to four million lives a year and reducing health-related costs by up to 3.2 trillion dollars a year.

In response, Markus Tacke, CEO of Siemens Gamesa, called on students across the world to opt for studies in STEM (science, technology, engineering and mathematics) and careers in renewable energy so as to play their part in halting climate change.

Students have transformed the climate change debate in 2019, bringing new urgency and energy to the growing crisis. Data supports this concern, as 60 percent of wildlife has been lost in just over 40 years.

Tacke, speaking at the launch of the report, acknowledged the impact that young people have had on the issue and made an unwavering commitment to bringing clean energy to society as part of the effort to tackle the crisis. Mr Tacke issued a call to action to young people, highlighting concerns that a serious shortfall of students pursuing STEM careers could leave the industry short of the talent it needs to drive change. He also highlighted the role that regulators, governments and companies have in driving energy transformation.

“You can do something” said Tacke. “You can choose to be the one that will make change happen. Choose STEM. Choose a career that will turn your curiosity and passion for change into solutions. Solutions that we need now, and which we will need even more tomorrow. We all come here today from different areas: representatives of the industry, analysts, political institutions. But we all have the same concern: how to use the knowledge and the instruments we have right now to start addressing climate change, because there is real urgency,” he said. “Financial incentives and clear policies are still lacking. The barriers to a full-scale transition to renewable energy lie not just with technology costs, but also with long term strategies and investments to make those ambitious plans reality”.

The new report also identified other key gains from the energy transformation. Water scarcity is becoming a major problem, affecting 40 percent of the world's population. The report highlights that wind could save 16 billion cubic metres of water by 2030 (equivalent to around 15 percent of the water in the Dead Sea).

Other conclusions from the report are that renewables could also be key to improving wellbeing in less developed countries. Around the world, one billion people still do not have access to electricity and 2.7 billion have no access to clean fuels and technologies for cooking. With an ambitious energy transition, universal access to both electricity and clean cooking would be achieved within a decade.

Report: The socioeconomic impacts of wind energy in the context of the energy transition