Thursday, 19 July 2012
0
REM
Only yesterday we reported that Siemens was among several offshore wind turbine manufacturers not to have placed any firm orders during the first six months of the year. Fortunately, for the German firm at least, this trend seems to have been broken as DONG Energy places an order this week for 300 offshore wind turbines. 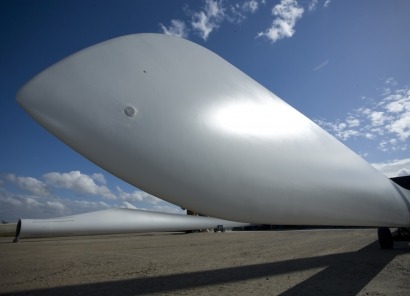 Today, DONG Energy and Siemens signed a framework agreement for the supply of a total of 300 wind turbines with a capacity of 1,800 megawatts (MW). The agreement is based on the new SWT-6.0-154 direct drive wind turbine that will be installed in wind power plants off the British coast between 2014 and 2017. The world’s largest rotor blade measuring 75 meters in length equalling a total rotor diameter of 154 meter will be deployed.

“Offshore wind energy has huge potential,” said Michael Suess, member of the Managing Board at Siemens AG and CEO of the Energy Sector. “Offshore wind conditions are strong and stable enabling an energy yield which can be about 40 percent higher than onshore. The United Kingdom, Denmark and Germany in particular are counting on the future of offshore wind energy. We are pleased that our long-term customer DONG Energy has chosen the latest generation of our wind turbines. Together we are working to further reduce the levelized costs for this environmentally-friendly form of power generation.”

DONG Energy already announced that it will install two of the new 6 MW wind turbines later this year for testing at Gunfleet Sands offshore wind farm. The 6 MW wind turbines are designed for large-scale projects, including the Round 3 projects in the UK. The target for 2020 in the UK is 18 gigawatts of offshore wind energy, which equates to around 18 percent of the UK’s electricity demand.

The energy production of Siemens’ 6 MW wind turbine is sufficient to supply about 6,000 European households with electricity. The rotor has a diameter of 154 meters and has a swept area of more than 18,600 square meters, which is equivalent to the area of approximately two-and-a-half soccer fields (FIFA norm). The new 6 MW wind turbine is designed specifically for offshore use – taking in to account: serviceability, and 50 percent less components including fewer rotating parts, all contributing to assuring the important reliability of the offshore technology.

Siemens and DONG Energy can look back on many years of successful collaboration in the field of offshore wind energy. In 1991, the two companies built the world’s first offshore wind power plant Vindeby in Denmark. This has been followed by a total of 13 projects with 930 wind turbines that have been generating electricity reliably ever since. Currently, the two companies are working on the Lincs, London Array and West of Duddon Sands offshore wind power plants in the United Kingdom, the Anholt project in Denmark, as well as the Borkum Riffgrund 1 wind farm in Germany. These projects alone have a capacity of approximately 2 gigawatts.