Tuesday, 02 July 2019
0
REM
Isotrol was one of the first companies that developed technology for the exploitation and operations of wind farms in Spain during the 80s and 90s. The company participated in the connection and monitoring of those initial plants and also the implementation of unknown technology in them. In this way, Isotrol gained access to a fledgling renewable sector, which nowadays operates as an essential partner in this ever-growing field of renewable energy technology. 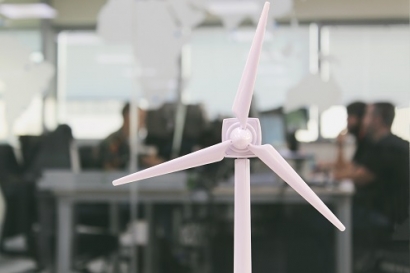 Isotrol and the wind energy origins in Spain

Recession came after the oil crisis of 1973. That OPEC embargo was a warning to Western economies about their risky dependence on oil. Seeking options, the affected countries turned their eyes towards renewable or alternative energies, as they were then called. These were expensive and undeveloped technologies, or even theoretical ones in some cases. However, wind energy was a reality in some countries such as Denmark and the US; but not in Spain.

In 1979, the Ministerio de Industria y Energía (Industry and Energy Department) of the government of Spain launched a research and development program to investigate wind energy exploitation. That first government of the new-born Spanish democracy began a journey into a new market which was in fact uncertain and costly. After all, renewable power generation costs were double those from conventional generation.

One of the main aims of this program was to devise a map of the Spanish wind energy capacity, a task that was made by the Centro de Estudios de la Energía (Center of Studies in Energy). As a result, the town of Tarifa was selected as the ideal place to build the first Spanish wind farm due to the speed and persistence of wind there.

By calling it wind "farm" it is possible to understand that it was a complex with several wind turbines, but the reality is that there were just two rotors. The big one was called Mazinger by the locals, like the giant robot from the Anime series. It was 20 m high, and also had three fiberglass blades and 110 kW of generating capacity. The other one was shorter and it was designed for the extraction of growing waters.

The Center of Studies in Energy constructed this experimental wind farm on a piece of land loaned by Ayuntamiento de Tarifa (Tarifa Town Hall). By doing this, the local government expected the plant to provide free electricity to the town when operating. This installation opened in 1982 and it was used  to test a new type of wind turbine which was to be manufactured in series and sold at a price of about  €7,200 of today. Unfortunately, the force of the wind in the Strait of Gibraltar froze all these plans until 1985, when the first successful test was finally completed.

Isotrol was established two years after Mazinger was opened as a technology-based business of Universidad de Sevilla (University of Seville), in order to develop innovative monitoring and control projects for the Spanish electric power industry. The new company could then implement specific technological solutions now that the wind power sector was a reality in the country.

The wind energy industry had no standardization a decade after the first experimental farm was launched. Promoters had to do everything in early 90s: find the location for their projects, measure the force of the wind or construct the farm; and that is if they had already found an investor. However, this first term seemed to end when Eólica del Sur (20 MW) and Eólica del Estrecho (10 MW) wind farms were launched in Tarifa, and a new exploitation model began.

Spain had 45 MW of installed wind power capacity when these two new facilities started their operations in 1993; this is a modest figure if we compare it with the 23.5 GW of installed capacity in 2018, but it is remarkable taking into account the immaturity of the industry at that time. This was a sector sustained, in fact, by an emerging technology. The environmental impact of these installations was one of the main worries at that time; in the same way, owners and promoters were considering retiring obsolete wind turbines and replacing them with other bigger and more efficient models, instead of extending their life span as is the case today.

Isotrol participated in these projects of the new term by developing the software that established communication within the wind turbines and the control centers, also by integrating these signals into the electric company (Endesa) headquarters in Seville. But it was not until 1998 when the most innovative technology of the company broke into the Spanish wind industry to improve its efficiency. That happened in a moment of concern regarding the viability of renewable energy, as it could be verified soon afterwards, at The Hague climate change conference.

An innovative system to improve management and reduce costs

Made, Endesa’s subsidiary which specialized in wind power and was finally acquired by Gamesa, commissioned Isotrol to take part in a project in control algorithms in 1998. The company entrusted the development, implementation and setting up of a wind farm’s control and management system to Isotrol. They wanted this system to make centralized teleoperation and management possible to therefore improve its availability and profitability.

However, Isotrol’s proposal went beyond that and was much more complete. Without a doubt, their experience with SCADA systems and their knowledge of telecontrol were decisive. The installed system allowed Made to access the data from wind turbines with a LonWorks communications bus every four seconds. This is a revealing fact considering that, at that time, you had to wait half a minute to do this. In the same way, the local SCADA system incorporated functionalities and configuration that were usual in commercial SCADAs with an additional communications driver that could send prioritized data to the control center. This new system guaranteed data inputs and outputs using a satellite bandwidth of 4.8 kB/s.

Made then had a centralized and accessible system that, not only eased both the centralized management of all its plants in the same control center (remote reset, reports, etc.) but also reduced the unavailability of wind turbines and the operating expenses of these installations, because it could accurately detect the origins of power losses.

Considering this result, Isotrol became one of the first companies that developed added-value solutions to improve renewable assets’ performance. The company took a leap forward that determined its history as an experienced technology partner in an industry that is crucial nowadays. Isotrol competes in this sector with its own solutions, like Bluence, and has reached 30 GW of monitored renewable power around the world.