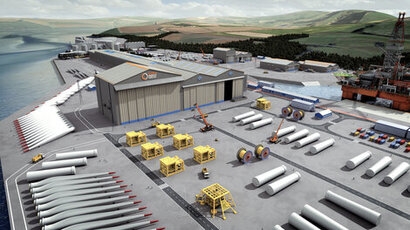 This will bring the total public and private investment into the UK’s offshore wind sector to more than £1.6 billion this year alone.

GEG and HWG will use the investment to develop a state-of-the-art manufacturing facility making wind turbine foundation towers at Nigg Energy Park on the banks of Cromarty Firth in Ross-Shire.

This facility, alongside the previously announced GE blade facility on Teesside, will supply the Dogger Bank wind farm, substantially boosting the UK’s offshore wind manufacturing base. Dogger Bank, when completed in 2026, will be the largest offshore wind farm in the UK and capable of powering up to six million homes across the country.

Total UK Government investment in the sector is creating and protecting almost 4,100 jobs in Scotland, the Humber Estuary and across the North-East of England - while building the UK’s offshore wind capacity as the country ends its reliance on coal for power by 2024.

Further funding to the project is being delivered by the Scottish Government via Highlands and Islands Enterprise, with the joint investment providing a huge boost to the local economy in North-East Scotland.

As the UK focuses on building a secure home-grown renewable energy system, reducing its reliance on unreliable fossil fuels and exposure to volatility in global wholesale energy prices, the deployment of offshore wind is set to accelerate in the next decade to ensure greater energy independence.

“The UK is already a global leader in offshore wind with the largest installed capacity in the world, and by ensuring we have the manufacturing base to match, local workers and the supply chain can share in the sector’s success” said UK Business and Energy Secretary Kwasi Kwarteng. “This joint investment shows the strength of our Union as we tackle climate change together. We will see highly-skilled workers in Scotland produce key parts for a wind farm situated off the English coastline - delivering a greener future for Scotland and the UK.”

UK Government Minister for Scotland Malcolm Offord added that the pledge represents a tremendous jobs boost for Easter Ross and the surrounding area which has long been recognised for its expertise in the energy industry.

“Now our skilled workforce is leading the way in our transition to a greener future” Mr Offord said. “and It's especially fitting that this area, synonymous with the oil boom in the 1970s, is leading the way as we embrace new cleaner sources of power. This joint investment will not only safeguard existing jobs, it will create new ones as we journey towards Net Zero by 2050 and continue to build back better and greener from the pandemic.”

Tim Cornelius, CEO of GEG, said that the announcement is a leading example of the green recovery in action and that it will create more than 400 direct long-term, high-value, jobs and will offer existing clients and new customers from around the world with the opportunity to buy ‘Scottish’, meaning that offshore wind developers can achieve their local content targets whilst helping the UK economy recover in a green and sustainable way.

The funding is part of the £160 million announced by the Prime Minister last year to further develop the UK’s offshore wind capabilities. The first funding from this came in March 2021 when the government announced up to £95 million investment to establish two new ports on the Humber and on Teesside to build the next generation of offshore wind projects.

The next round of funding saw £185 million of Government and private sector investment as more than 1,000 jobs were created across the North-East by offshore wind manufacturers SeAH Wind Ltd and Smulders Projects UK.

Further investment on the Humber by Siemens Gamesa and GRI Renewable Industries saw another boost for the UK’s offshore wind manufacturing industry, with over 1,340 jobs created and protected thanks to £266 million of UK government and private sector investment.

Thanks to further funding, JDR Cable Systems Ltd are planning a £130 million investment to build a subsea cable manufacturing facility in Blyth that will supply components to their existing factory in Hartlepool creating and safeguarding 440 jobs across both sites.