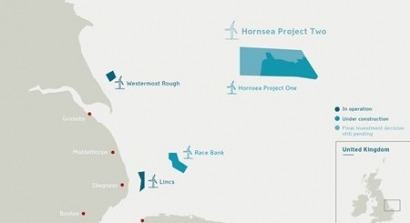 The $7.8 billion dollar (£6 million) Hornsea Two is being developed in the North Sea, roughly 89 kilometers off the Yorkshire coast, by the Danish utility Dong Energy A/S.

The new, 1.8 GW project is significantly larger than Dong Energy's 1.2 GW Hornsea One, a project that has also been approved, but not yet built.

When it is completed, Hornsea Two, which is being developed by SMartWind, owned by DONG Energy, is expected to provide enough energy to power 1.8 million U.K. homes.

The project is expected to create 2,000 construction jobs and about 580 permanent operations and maintenance jobs, the company said.

Greg Clark, Britain's business and energy secretary, said in a statement that the nation considers itself a leader in offshore wind and is "determined to be one of the leading destinations for investment in renewable energy"

"Hornsea Project Two is a huge potential infrastructure project which could provide enough green energy to power 1.6 million UK homes. A project of this size will help in our efforts to continue reducing the cost of electricity from offshore wind and shows our commitment to investing in the UK," Cheshire said.

The government approval comes amid uncertainty over the future of the Hinkley Point C nuclear project after Theresa May delayed signing off the new £18 billion power plant last month.

Huub den Rooijen, Director of Energy, Minerals and Infrastructure at The Crown Estate, said: "Offshore wind is already on course to meet 10 percent of the UK's electricity demand by 2020. Major developments of Hornsea Project Two's scale will pave the way for its continued growth alongside driving down costs, creating high value jobs, and supporting the UK's transition to a low carbon energy supply."