Tuesday, 26 November 2019
0
REM
A technology developed at the US Department of Energy’s Oak Ridge National Laboratory and scaled up by Vertimass to convert ethanol into fuels suitable for aviation, shipping and other heavy-duty applications can be price-competitive with conventional fuels while retaining the sustainability benefits of bio-based ethanol, according to a new analysis. 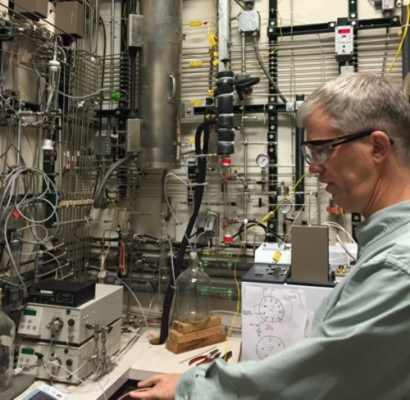 ORNL worked with technology licensee Vertimass and researchers at 10 other institutions on a technoeconomic and a life cycle sustainability analysis of the process – single-step catalytic conversion of ethanol into hydrocarbon blendstocks that can be added to jet, diesel, or gasoline fuels to lower their greenhouse gas emissions. This new technology is called Consolidated Dehydration and Oligomerization, or CADO.

The analysis, published in Proceedings of the National Academy of Sciences, showed that this single-step process for converting wet ethanol vapor could produce blendstocks at $2/gigajoule (GJ) today and $1.44/GJ in the future as the process is refined, including operating and annualized capital costs. Thus, the blendstock would be competitive with conventional jet fuel produced from oil at historically high prices of about $100/barrel. At $60/barrel oil, the use of existing renewable fuel incentives result in price parity, the analysis found.

The conversion makes use of a type of catalyst called a zeolite, which directly produces longer hydrocarbon chains from the original alcohol, in this case ethanol, replacing a traditional multi-step process with one that uses less energy and is highly efficient.

“The robustness of the catalyst enables direct conversion of wet ethanol, which greatly simplifies the process, reduces the cost of ethanol purification and makes hydrocarbon blendstock production costs competitive based on the analysis,” said Zhenglong Li, staff scientist for biomass catalysis at ORNL and a collaborator on the project.

While this single-step catalysis was effective at laboratory scale, further testing and improvements by Vertimass resulted in even higher product yields when scaled up 300 times using commercial catalyst formulations. The conversion operation could be integrated into new biofuels plants or installed as bolt-on technology to existing ethanol plants with minimal new capital investment, the researchers noted.

A life-cycle analysis of the conversion process found that its greenhouse gas emissions profile is similar to that for the ethanol fed to the process.

“The sustainability of bio-derived ethanol, now mostly produced from corn in the United States but with some now being made from corn stover and eventually dedicated biomass feedstocks like switchgrass, carries through with the catalytic process,” said Brian Davison, chief science officer for DOE’s Center for Bioenergy Innovation (CBI) at ORNL and a collaborator on the project.

Refinements by Vertimass to the original, lab-scale process include the development of cheaper forms of the catalyst, as well as more than doubling the liquid fuel yield, the paper noted.

The paper details the refinements as well as results from analyses by Argonne National Laboratory, the National Renewable Energy Laboratory, Vertimass, and ORNL in collaboration with Dartmouth, the Federal Aviation Administration, Boeing, Pennsylvania State University, University of California-Riverside, Imperial College of London, the Brazilian Bioethanol Science and Technology Laboratory, and the Brazilian Center for Research in Energy and Materials.

ORNL is managed by UT-Battelle for the U.S. Department of Energy's Office of Science, the single largest supporter of basic research in the physical sciences in the United States.

Photo: A pilot reactor, developed by Vertimass and located at TechnipFMC, can scale up the process that converts ethanol into fuels suitable for aviation, shipping and other heavy-duty applications. Credit: TechnipFMC.