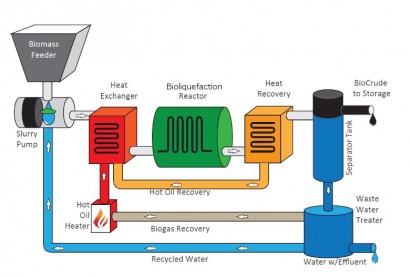 The underlying technology -- which was developed by Shell Oil over several years -- will allow the Los Altos, Calif.-based firm and its partners to produce bio-based petroleum at commercial scale for $75 to $85 a barrel out of wet biomass that has not been mechanically or thermally dried.

NextFuels says it will also provide palm plantation owners and others a way to transform the tons of residual plant matter generated by agricultural operations into a new, profitable second crop.

The company is collaborating on its commercial strategy with Enagra, a biofuel trading company with extensive contacts and partnerships throughout the industry, on the development of its technology.

The two companies are owned by the same investors and managed by executives with extensive experience in biofuels. Over the past ten years, Enagra has conducted over $1 billion in biofuel transactions and will achieve revenues of approximately $150 million in 2013.

"Dr. Frans Goudriaan and Dr. Jaap Naber have been working on this technology for almost 30 years," said Michael Petras, CEO of NextFuels. "With Dr. Ralph Overend's extensive background in the biomass and biofuels space, we are extremely excited to be moving this unique technology forward. While we have a lot of work ahead of us, we look forward to helping solve the biomass issue in Malaysia."

Edible palm oil has surpassed soybean to become the largest source of cooking oil in the world, accounting for over 50 million tons of oil annually.

While plantation owners have managed to increase the productivity of their land by 15X since the late 80s, the growth of the industry has created a corresponding residue problem. Approximately 4.4 to 6 metric tons of agricultural waste is generated for each metric ton of oil. There are over 1,000 crude palm oil (CPO) mills in Southeast Asia and a single (60 tons per hour) mill can generate 135,000 tons of agricultural residue a year.

NextFuels uses a system called bio-liquefaction that efficiently transforms agricultural biomass to green energy. Biomass is placed into the plant mixed with water. The mixture is then heated to 330-degree Celsius while pressure is increased to 220 bar. Increasing the pressure keeps the water from coming to a boil, which conserves energy.

When cooled, the hydrocarbons form a putty-like substance called GreenCrude. Roughly 25 percent of the GreenCrude can be burned as a solid fuel in industrial boilers. The remaining 75 percent can be converted into a liquid-fuel equivalent to petroleum that is compatible with existing pipelines and vehicles.

The equipment required to convert GreenCrude into liquid fuels, in a process called hydrodeoxygenation, is already installed at most refineries and can accept GreenCrude with minor refinements.

Unlike many other biofuels processes, NextFuels does not need to dry biomass before processing. The process is uniquely and specifically designed to work with wet biomass.

Illustration: The diagram above presents an overview of the NextFuels’ GreenCrude© creation process.