Virgin Australia and Gevo to Supply Biofuel at Brisbane Airport 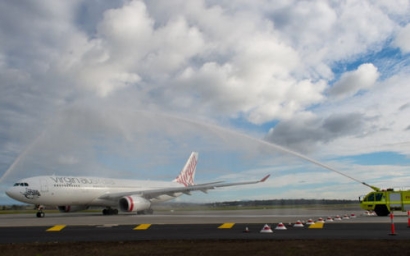 Gevo will supply the ATJ from its hydrocarbon plant based in Silsbee, Texas. The ATJ is derived from isobutanol produced at its commercial isobutanol plant located in Luverne, Minnesota.

The biojet will be blended with traditional jet fuel and supplied on flights departing Brisbane, Australia, including Virgin Australia flights, over a two year period.

Virgin Australia will be responsible for coordinating the purchase, supply and blending of the fuels and will work closely with the Queensland Government, Brisbane Airport Corporation (BAC), Gevo Inc and other stakeholders to implement the initiative. It is expected Gevo will ship the first gallons of ATJ to the Virgin Australia Group this month.

This marks the first time in the world that biojet produced using the alcohol-to-jet process will be supplied to an airport’s regular fuel supply system.

The Queensland Government strongly supports the initiative. Speaking from Brisbane Airport, Queensland Premier Annastacia Palaszczuk said: “Biojet is fast becoming a staple of the aviation industry, and Brisbane is joining major airports such as Los Angeles and Oslo in embracing a sustainable aviation future.”

Premier Palaszczuk added that the initiative from the Virgin Australia Group and Gevo could also catalyse investment in Queensland’s biofutures and sugarcane industries.

“The commitment from the Virgin Australia Group to coordinate the purchase, supply and blending of the biojet provides a significant opportunity for Queensland’s burgeoning biofutures industry.”