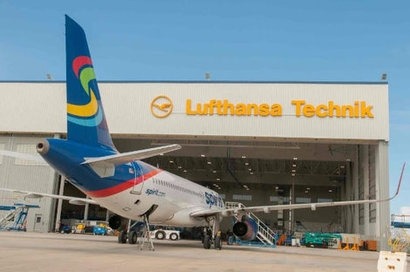 Lufthansa Technik Puerto Rico announced the agreement of a supply contract with Entrade involving two Trigeneration plants which will begin operating in May 2017. The two plants will be deployed in two 20 foot containers next to two aircraft hangars which will make them visually inconspicuous. The plants will generate reliable, on-demand energy that will replace expensive power from diesel.

Lufthansa Technik AG specialises in MRO (maintenance, repair and overhaul) services for aircraft. Since 2014, the company has been steadily expanding its state-of-the-art site at Rafael Hernandéz Airport in the west of Puerto Rico which now employs more than 350 people. The facilities in the two aircraft hangars for five medium-range aircraft include a painting line and the two biomass plants will help to guard the site against excessive temperatures and the resulting failure of the power supply.

“To date we have been using diesel generators to minimise the risk of power failures” said Elmar Lutter, CEO of Lufthansa Technik Puerto Rico. “The energy supply in Puerto Rico is comparatively expensive and is not 100 percent reliable. That’s why we were looking for a viable alternative. At all Lufthansa Technik sites, both resource conservation and emission reduction play a major role in achieving corporate objectives.  The emission-free Entrade power plants are the perfect fit - using fuels like waste wood direct from the surrounding area. We were also impressed by the combined supply of power and refrigeration - it’s well known that we have more than enough heat.”

Entrade CEO Julien Uhlig added that Lufthansa Technik’s high profile makes it a hugely valuable partner for the company while its first presence in the immediate vicinity of an airport will also raise its profile among this customer segment globally.

Cleantech company Entrade operates all over the world as a decentralised energy supplier in association with arensis corporation. The two companies supply power to the Los Angeles Cleantech Incubator building, as well as several industrial companies in one of Europe’s largest business parks near Liverpool. In the Japanese Prefecture of Fukushima, clean energy from Entrade is used for heating water and some of the rooms at a spa resort. The Type E3 power plants can be integrated into standard containers and operate with different kinds of biomass. In Puerto Rico, pellets based on waste wood produced in the region will initially be used as the fuel for environmentally friendly energy generation. The cooperation will involve investigating the scope for using aircraft waste (catering waste) directly from the airport. Catering waste currently has to be disposed of and this is very expensive.