Monday, 01 October 2018
0
REM
Enel Green Power, together with academic and research partners like the Sant’Anna School of Advanced Studies in Pisa and the University of Florence , both in Italy, and industrial partners like I.S.E and SDI Industrial Automation, has created SmartGEO, an innovative remote diagnostics project that allows applies new digital technologies to predicting geothermal plant performance. 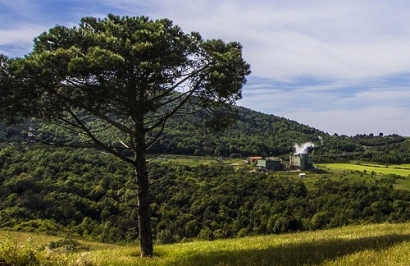 SmartGEO was developed with the support of the region that is the cradle of global geothermal energy, Tuscany. With the European financing program POR-FESR, the region brought together local companies and research centers to contribute 25 percent of the total €3.3 million ($3.8 million) financing.

The project was presented on September 19th and 20th  in Zagreb, Croatia, as part of the South Eastern Regional Workshop, one of the periodic meetings organized by the European Technology and Innovation Platform for Smart Networks for Energy Transition (ETIP SNET), featuring research and innovation in energy.

SmartGEO’s end goal is the reduction of inefficiencies, from malfunctions to small technical problems, to increase the geothermal plants’ energy production capacity.

The first phase of the SmartGEO project began almost two years ago, in 2017, when the Rancia 2 geothermal plant in Larderello, Tuscany, saw the installation of sensors and systems in its most important components, from the wells, the steam collection network, the re-injection pumps and pipelines to the steam cleaning systems.

SmartGEO is based on the integration of existing technologies with new concept solutions, both for sensors and analysis, in order to collect and examine all the plant’s data.

Thanks to data processing with new and innovative engineering algorithms, machine learning and Bayesian networks, SmartGEO made it was possible to get into the heart of the Rancia 2 plant and understand how to improve its maintenance and increase its performance.

A key component of the project was the use of an innovative human-machine graphic interface, which allowed operators to quickly identify the best corrective measures.

“Innovation and digitalization in the geothermal field are aimed at minimizing inefficiency and unplanned maintenance works. In this way, we can achieve clear improvements in plant management, ensuring economic savings and lower environmental impact,” said Matteo Galgani, Tecnical Support at Enel Green Power

In every stage of SmartGEO’s development, key contributions came from the Sant’Anna School of Advanced Studies in Pisa and from the University of Florence. With their work, they enabled EGP, and other industrial partners, to create a highly innovative product.

The University of Florence, specifically, created complex analytical algorithms, which have been applied to the energy field for the first time, opening up new scenarios in plant performance evaluation.

And researchers at the Sant’Anna School of Advanced Studies have developed new wireless sensors that, based on a specific internet protocol, will be able to be used in other contexts as well, like smart grids, home automation and other industrial areas.

The use of tools for remote diagnostics allows for the integration and simplification of the control, automation and diagnostic systems already present in a plant, and also provides an opportunity to increase plant performance.

At Rancia 2 the implementation of SmartGEO is already expected to increase production by at least 1.5 GWh a year.

In the second stage, the model will be replicated in seven additional twin units, at a much more contained development cost, for an overall production increase of 12 GWh a year.

In the third phase of the project, with the acquisition of greater expertise and know-how, it will be possible to design a second generation of the remote diagnostics system, which will be used in plants powered by other renewable sources as well.