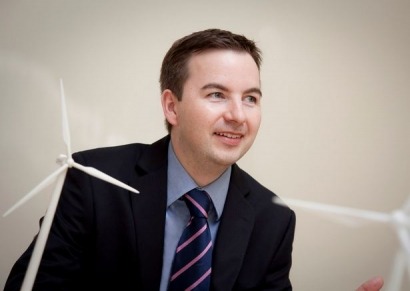 Kenneth Matthews was appointed as the CEO of the Irish Wind Energy Association in September 2011. He has over 14 years experience in the Irish energy industry and has previously worked with Intel, EirGrid and ESB. His experience encompasses power system operation and protection and transmission access planning with EirGrid including the technical and commercial aspects of generation and load access to the transmission and distribution system. He has also held numerous management roles including Production Manager Poolbeg Power Station and Station Manager Ardnacrusha Power Station and has been involved in delivering numerous projects across power generation from safety to power plant overhauls. Recently he developed and led a stakeholder management and engagement programme for ESB’s hydro portfolio. Mr Matthews is a BEng Hons graduate from University of Ulster holding a diploma in Industrial studies and safety management.

The IWEA is the national body representing the wind energy sector in Ireland. Just recently it launched a new policy paper “Export Policy - A Renewables Development Policy Framework for Ireland” at its autumn conference in Killarney which outlined the various benefits for the Irish economy if the country’s potential domestic renewable energy export was realised. Essentially the paper explained how Ireland could not only meet its own renewables targets but could also assist other countries within the EU to meet theirs, something which would create thousands of quality jobs in Ireland as well as generating R&D opportunities and attracting investment.

As a signatory to the Kyoto Protocol Ireland has been proactive in developing its wind industry and Renewable Energy Magazine was therefore very pleased to have a chance to speak directly to Mr Matthews in order to find out more about the exciting opportunities available to Ireland’s wind sector.

How receptive are people in Ireland right now to the development of a strong wind energy network?

People are generally positively disposed to wind energy in Ireland. Many People in society recognise that we need to embrace a shift in how we generate electricity and in doing so we can create jobs and bring investment to Ireland for that transition.

What are the main economic opportunities you see becoming available from a strong Irish wind sector?

There are significant economic opportunities for Ireland that have and will continue to result from having a strong Irish wind sector. A number of these were outlined in IWEA’s recently published policy paper, entitled Export Policy- A renewables development policy.

Firstly, the local Irish economy will directly and indirectly benefit from a successful wind industry. Wind farms will provide jobs and investment in a sustainable industry. For example, at present wind farms contribute 11.5mn per year to county councils funding requirements in Ireland. An additional 17mn in rates will be created by reaching EU RES-E targets.

Secondly, the Irish economy will benefit from a lowered reliance on finite energy sources, with consumers also benefitting from lower energy prices.

The biggest economic opportunity open to Ireland is creating a viable wind exporting energy industry. The Irish customer will not fund this opportunity, the demand and payment will come from those who purchase our resources. To achieve this, IWEA believes that targets must be set regarding renewable energy and IWEA is confident that government departments will work in tandem to maximise this opportunity. The exporting potential that Ireland has is clear and if realised it will create 18,400 jobs by 2020. Additional if we put the enablers in place to bring turbine manufacturing to Ireland the sector can create an additional 12,000 jobs.

How would a failure by the British government to establish a clear policy framework for wind energy affect the plans for an Anglo-Irish wind energy link, and would that failure also have an adverse effect on the Irish wind energy sector?

IWEA welcomes the initiative to develop a formal Memorandum of Understanding on renewable energy trading between Ireland and the UK which we understand is on track to be finalised by the end of the year. We believe there is real commitment on the part of both countries to see this inter-Governmental agreement in place and the opportunity for Ireland to become a renewable electricity exporter of scale before 2020 is well recognised.

To get there, all key stakeholders in Ireland and the UK now need to deliver the integrated policies and initiatives required to deliver renewable energy trading. A specific target of at least 6GW of wind energy could form part of a minimum deliverable export potential that Ireland has to offer member states in advance of reaching our 2020 energy targets.

This agreement has the potential to advance several significant renewable energy projects across Ireland, including both onshore and offshore wind; support much-needed jobs in construction and throughout various supply chains associated with the sector and increase investment opportunities for Ireland that could arise from both existing companies and new entrants to the market.

What are the main challenges for Irish wind energy development in the near future?

As with any development there will be challenges but IWEA are positive that these will be overcome. The government published their Strategy for Renewable Energy 2012-2020 policy paper in May and IWEA welcomed this document. It reaffirmed the Irish governments support for the wind energy sector and also strengthened its commitment to progress with the Ireland-UK intergovernmental energy trade agreement. This is an important and welcomed step, but the momentum concerning the intergovernmental agreement must be maintained and IWEA is confident that this will happen given the Irish governments commitment to the wind energy sector.

Challenges will also be opportunities. These are renewable energy trading, transmission interconnection and market and regulatory integration.

What do you make of the British Treasury’s predilection for gas as opposed to wind?

IWEA do not believe that this is the case.

The Irish Government are very supportive of wind energy and there have been many positive developments announced by the Irish Government in 2012. As mentioned, the Irish Department of Communications, Energy and Natural Resources published their Strategy for Renewable Energy 2012-2020 document in May 2012. IWEA welcomed this publication as it reaffirmed the Irish governments support for the wind energy sector and also strengthened its commitment to progress with the Ireland-UK intergovernmental energy trade agreement.

Additional the Irish Government have secured approval for REFIT II which will allow Ireland make significant progress towards meeting our domestic target.

IWEA has continuously engaged with the Irish Government and will continue to do so in the future, to help the wind energy sector in Ireland reach its full potential.

The UK is the world leader in offshore wind. What is Ireland doing to follow in its footsteps and how is the UK's position beneficial to Ireland in this regard, for example in terms of proximity to an established supply chain?

Ireland has substantial potential developments in both onshore and off shore wind. The potential to connect offshore wind farms into an offshore grid network, as EirGrid recently identified can have huge benefits for Ireland.

The availability of finance to drive the transition to a low carbon economy was discussed during the IWEA Autumn Conference this month (4 Oct). What conclusions were drawn from these discussions?

Finance is obviously a critical component in powering a low carbon economy, however the cost of this transition is unprecedented, with predicted investment growth from $740bn (2009) to $2.2trn (2020). In addition to this, EU Electricity Capex Need to 2020, identified a finance gap of 600bn which will need to be filled.

IWEA believes innovative financial techniques will be needed to meet this substantial challenge. Ireland already has an attractive fiscal environment, expertise in markets and world class skills in the financial services sector.

However, we must harness these existing resources and seek to make Ireland the centre of excellence for Green Finance which could be achieved by making Ireland the Servicing Centre for Green Funds. This can not only be driven by industry but also by government however. Effectively Ireland would not only export Green energy but also Green Finance.

This view on the potential of green financing is also noted by the Irish Department of Jobs, Enterprise and Investment. In its Action Plan for Jobs policy document it states that it will seek to attract green related financial products and services to Ireland.

For further information on the IWEA: