Everyone, inc. Republicans, more aware of what green industry means to US

Thursday, 17 May 2012
0
REM
In this exclusive interview, Juan Verde, Sustainability Advisor to the President of the United States, gives us an insight into his experiences, his vision for the sector and the boost the US government has given to renewables. "In a second Obama term, energy reform will probably be the priority for his administration," he says. 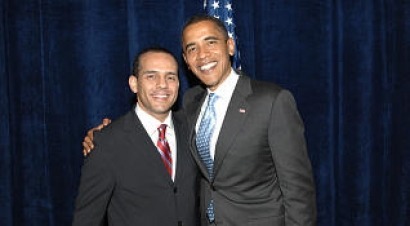 Juan Verde (1968, Telde, Gran Canaria) serves as an advisor to President Obama on international trade, Hispanic vote and Sustainability related issues. Between 2009 and 2011, he served as Deputy Assistant Secretary for Europe at the United States Department of Commerce. He has reached the highest in the US administration of any Spaniard.

Since October, Verde has also been working on the reelection campaign of President Barack Obama as International Co-Chair, having previously worked on the political campaigns of Senator Ted Kennedy, President Bill Clinton, Vice President Al Gore, Senator John Kerry, and Secretary of State Hillary Clinton. While at the Department of Commerce, he played a key role in promoting renewable energy.

What is the role of renewables in the energy mix in America?

The United State’s energy mix currently includes 6% of clean energy. Of that percentage, 4% is hydropower. In reality, we are talking about a 2% share for wind and solar. The Obama administration wants to increase this from 2% to 25% by 2025. This implies an exponential change.

The second largest wind market in the world is the US, behind only China. Nevertheless, wind energy only represents about 1% of this mix. What will happen when we rise from one to seven or ten percent of wind? If the US makes this shift successfully, it will become a world power and we will take the lead in this sector. Obama's message has been as follows: the nation that leads the fight for supremacy in green energy innovation will win the fight in terms of economic superiority.

Obama said in his State of the Union address that he has no intention of letting China or Germany take the lead in renewable energy. Is he able to maintain the backing for renewables in times of crisis, especially given that the US Congress, controlled by the Republicans, is reluctant to provide the sector with state aid?

When you are in government, you don’t always do what you want, but what the opposition let you do. Obama has wanted to give a boost to the deployment of green technologies. He has done more for the development of renewables in the last three years than was achieved in the previous two decades. That said. He certainly has not done as much as he wanted, in part because Congress is in Republican hands and they have prevented him from doing more.

However, here are some figures on the achievements made so far. The federal government budget for the deployment of renewables in 2008, under the last administration, was $1,200 million. With Obama this has risen from $1,200 to a commitment of $15,000 million per year over the next decade. In total, $150,000 million will be spent in ten years. The message is that the US federal budget for the green energy sector has multiplied.

There has also been a large injection through the economic stimulus package, amounting to $700,000 million, 10% of which went to renewables. This money is being used for R&D and inn0vation in three areas: energy efficiency, energy storage and renewable energy. Never has so much been invested so much in so little time in a single sector in the US economy. This commitment to green energy has been coined the "new Apollo" in reference to what it meant to America to send a man to the moon from the point of view of technological developments. Thanks to this technological push in the sixties, today we have wifi, GPS, mobile phones – systems that have changed the world. Proportionately, we are now spending more money than was invested in the sixties to send the man to the moon.

How are funds for green industry distributed?

On the one hand there is the package for R&D and innovation, and on the other the tax credits and financing for major projects. For example, the Spanish company Abengoa has been one of the companies to receive the most money from the US government, because it has large projects that fit into Obama’s strategy. This has allowed the company to commence construction of the largest solar thermal electric plant in the world in Arizona.

As Deputy Assistant Secretary at the Department of Commerce for two years, how did the roll-out of renewables on both sides of the Atlantic compare?

Renewables have played an important role in bilateral relations between the US and Europe. More and more European companies, mainly Spanish and German, have decided to invest directly in the US because they realised that the green sector there is still nascent, is at a development stage.

In just a few years there has been significant growth of European investment, particularly Spanish and German. And vice versa: in recent times capital investment funds have flowed from US financial institutions into Europe.

Interestingly, what was discovered is that green and renewable technologies and other strategic sectors represented an opportunity for collaboration between the US and Europe. Bilateral relations between the two have long been somewhat difficult in highly protected sectors on both sides of the Atlantic. However, in the new sectors such as nanotechnology, common standards for photovoltaic panels or electric cars, everything was still to do. The US government therefore saw a great opportunity to work with our European partners to jointly develop common standards.

It's something that has makes a lot of sense; Europe and the US represent 52% of global GDP. If we hadn’t done so, we knew that China, India and other countries would pass us by.

Is China also the greatest competitor in the renewable energy sector?

China is a formidable opponent for the US and Europe in a sector that is as strategic and important to the future as energy. It is estimated that China is investing in the order of $9,000 million a month in energy efficiency, developing the country's electricity grid, and renewables, particularly wind and solar. With these figures, it is very difficult to compete, although they also bring hope.

Despite the current crisis, the fact that the future will be greener is not a matter of direction, but intensity and speed. Changes are taking place, nobody will stop them, we can only talk about the intensity and pace at which they will take place. When you have countries like China, Brazil, India and of course Europe and the US making such commitments, it would be shortsighted not to recognise this reality.

We are concerned that in many sectors China does not want to compete on an even playing field for all. The rules must be the same for everyone.

The United States has more jobs in the clean energy sector than those generated by fossil fuels.

More and more Republican and Democrat governors, senators and congressmen and women understand that green employment means quality jobs, more training for employees and higher wages than the average of other sectors. It is a form of employment that requires a commitment to the development of human and local talent. Texas, a Republican state with a past and present steeped in oil, is currently leading this transformation of the economy towards one that is much greener.

Renewable energy companies are awaiting approval in the US Congress of the tax credits to keep growing. Why is this?

We are at an impasse. The US, particularly Washington, is experiencing a situation of absolute paralysis, largely due to the year-end elections. On the other hand, I think most Democrats believe that this is not a solution. We cannot take a myopic and short-term view. These incentive plans are renewed from year to year and we have to make a huge commitment to a true energy reform. What Obama wants to include is an emissions trading system that is as or more aggressive than the European one, including tax incentives that are transparent and give continuity to the model so that companies can invest long term. Until this is achieved, anything else will just be a patch up. In a second Obama term, energy reform will probably be the priority for his administration.

Investment funds have tended to back solar thermal electricity. Is the most promising of all renewables?

Today, the two technologies that are closer to parity are wind and solar. In particular, CSP has a bright future in the short term if two solutions can be found: the provision of storage capacity and the ability to hybridise with other technologies. Achieving a greater modularity of CSP facilities is also another challenge faced, as large tracts of land are currently needed. In places like Hawaii we already know that solar power is fully competitive without any support.

The US photovoltaic company Solyndra received a government guaranteed loan of $535 million in 2009, but after two years it went bankrupt and laid off more than a thousand employees. Has the Solyndra case negatively affected the solar industry in the US much?

I'm afraid so. What President Obama said about the case is full of wisdom. He says the government will make mistakes with some of the things it does; it is impossible to think that it is infallible. The important thing is to stay the course.

What is the silver lining for renewables around the cloud of the recession?

In Europe and especially in Spain, great opportunities lie ahead once the new legislation allowing self-consumption, and therefore distributed energy, comes into effect. The current crisis has forced the renewables sector to shift its deadlines, but it has not done much to change its original plans. But I'm not sure this is all bad. The crisis closes some doors and opens others. In the short term, some doors were closed due to the Spanish government's measures to reduce funding for renewables, but on the other hand, great opportunities have arisen for other companies in sectors such as energy efficiency and distributed generation.

The crisis will make us seek solutions that will allow us to be more efficient, reduce operating costs, and become more competitive. It is absolutely proven that a green building can reduce energy consumption by 50%. This represents savings and increased competitiveness for businesses.

If there is a Republican administration after the November elections in the US, will renewable energy development suffer a slowdown?

The answer is categorically no. The future of renewables in the US, as I said, is a matter of intensity and speed, not direction. So I hope that this will not happen. Everyone, including Republicans, is becoming more aware of what green industry means to the US economy. There is increasing social pressure from voters regardless of their political ideology to not abandon this drive, and so I believe that an agreement will be reached at the end of the year to extend these incentives long enough until the new administration enters power.