Thursday, 07 June 2012
0
Toby Price
In this exclusive interview, we talk to Dr. Arthur Wellinger of the European Biogas Association about the current status of the sector and how it can contribute to meeting the EU’s targets in 2020 and beyond. Wellinger is confident biogas could easily cover around 2% of Europe's total electricity demand of 3,042 TWh by 2020. 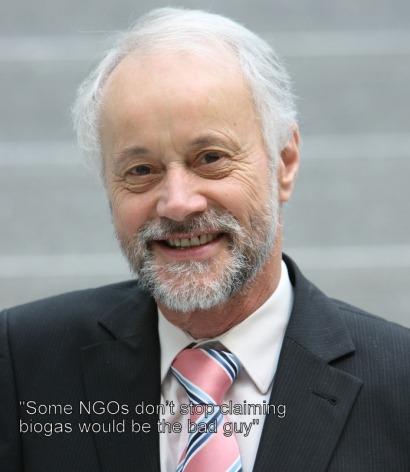 Its steadily growing membership already provides a well-established network and communication platform for exchanging information and expertise, allowing countries which have recently started to roll out their biogas capacity to benefit from the experience gathered by more advanced biogas countries. EBA unites a large number of the most experienced biogas experts in Europe and has highly experienced and skilled staff providing policy advice, know-how and information to promote beneficial legislation and framework conditions in the field of biogas. EBA is also member of the European Renewable Energy Federation (EREF), AEBIOM (the European Biomass Association) and the European Biowaste Alliance.

According to EBA data, there are approximately 7,000 biogas plants currently in operation across Europe, with an installed capacity of over 4000 MWe. The sector enjoys regulatory support in several countries, with the highest feed-in tariffs per kWh in Switzerland, Germany and Italy.

The EBA’s President, Dr. Arthur Wellinger, is managing director of Triple E&M, an international consulting company located in Aadorf (Switzerland). He is best known for his contributions in the development of anaerobic digestion processes, and is a member of a number of national and international associations and expert groups such as the Bioenergy Agreement of the International Energy Agency, where he is appointed as Technical Coordinator.

In its latest Biogas Barometer, EurObserv'ER described the biogas sector as “a blue-chip value that most European Union countries intend to bank on”. However, as a renewable energy journalist, it is evident that the biogas sector is not generating the same level of interest among governments or in the business world as other clean energy sectors. Why is this?

In some of Eastern European countries' NREAPs, biogas is among the highest ranking renewable energy, but in general biogas ranks behind solar and wind. There are a multitude of reasons, the major ones being limited (waste) resources and a fear of  complexity. A windmill or a PV cell probably look simpler and sexier to a politician than a biogas plant. Even more though, anaerobic digestion (AD) falls into at least two different ministries, i.e. energy and agriculture and therefore needs coordination between the corresponding departments, which is always difficult.

In recent years another problem has arisen which is the food vs. fuel discussion. With completely the wrong understanding of the real world, some NGOs don’t stop claiming biomass (inc. biogas) would be the bad guy... that in some countries people are starving. Not to speak about the environmental harm biofuels are creating. Supposedly, they are the sole reason the rain forests have been disappearing over the last fifty years. However, increasingly scientists and well-trained administrators are beginning to understand that the world is more complex. One result of this new thinking is the fact that the European Commission has postponed for the third time the definition of land use change and indirect land use change.

The EU bioeconomy already has a turnover of around €2 trillion and employs more than 22 million people; 9% of total employment in the EU. What contribution does biogas currently make to the EU economy in terms of wealth and job creation?

Unfortunately, only Germany produces such figures today [see table below]. Therefore a judgement is difficult. 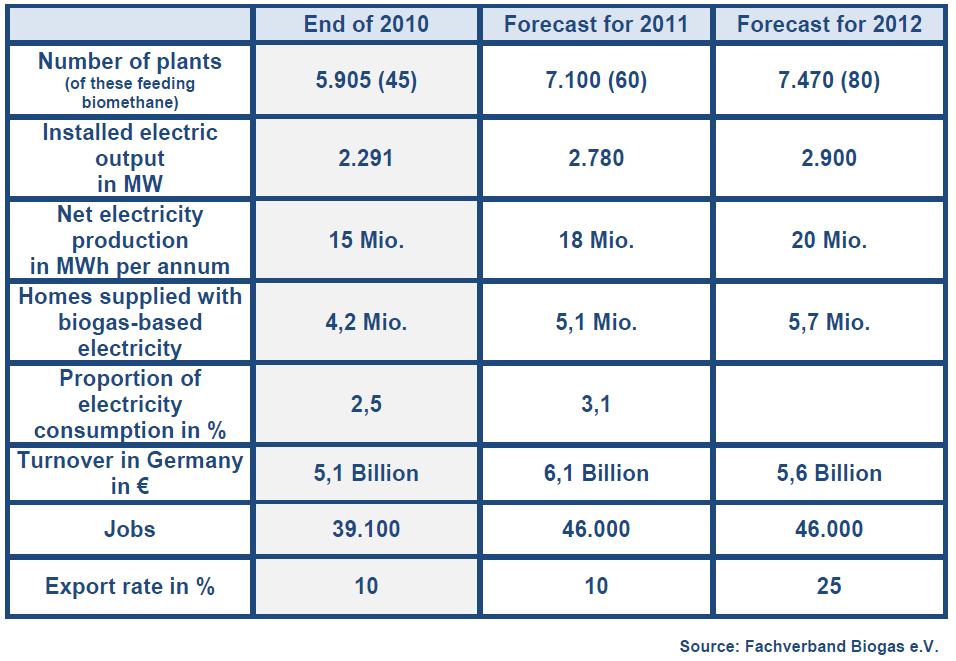 There is an old saying: “where there’s muck, there’s money”. How profitable are biogas plants really?

If you want to get rich (and poor) fast, you better gamble at the bourse. If you have to count on the sale of energy as your only income, it is usually a tight business. However, if you can sell either the heat or the digestate on top, a net gain of 10% is envisaged and achievable. If you are operating a waste plant and get a gate fee from the material delivered, then it’s a business like all the others too.

It’s not just about the revenue generation from biogas electricity sales. Australia’s CST Wastewater Solutions for example says that in the brewing industry, its anaerobic biogas plant can reduce water usage to 2.2 litres per litre of beer produced (well above the global average of 4-5 litres), and cut overall energy consumption by around 15%. Why are more firms in energy and water-intensive industries not queuing up to make such savings through biogas plants?

In Europe, some two thousand high-rate digesters in industries (dairy, breweries, distilleries, soft drinks, etc.) are using AD for cleaning waste water. Most of the biogas is used for steam production. It is undisputed that there is still a considerable potential. As a result, the Commission (under the IEE call) launched a tender process, that closed on 8 March.

Biomethane injection into the natural gas grid is booming in some European countries such as Germany and Sweden. The EBA is involved in the Green Gas Grids project aimed at boosting biomethane grid injection across the continent. How are you encouraging other Europeans to follow in these countries’ footsteps?

We are following different tracks such as the information of gas utilities, transmission system operators, and of course governments. The main focus is given to overcoming the cross-border trade which is actually very difficult. Only three contracts have been established to our knowledge on a bilateral basis. We are still far from a free trade like for natural gas. We therefore try hard to bring the nine registries so far formed together, hoping that they will adapt their systems allowing an all-European registry and redemption.

At the same time we are collaborating with CEN TC 408, where standards for biomethane injection and as vehicle fuel are defined. This is not easy because not even natural gas has a European standard yet.

Specifications and feed-in tariffs for biogas injection into the grid were finally published late last year in France. Have these measures led to a surge in biogas projects in this country during the first half of 2012?

Yes indeed. As far as I know up to 80 projects are somewhere in the pipeline and eight or nine have already got a permit.

In contrast, several European countries are actually cutting (Germany and Estonia) or even eliminating (Spain) feed-in support for renewable energy. This is impacting on the private sector’s ability to obtain project finance for clean energy projects. Is this trend slowing down market development in the biogas sector, and if so, what is the EBA calling for to reverse this decline?

Lobbying together with the national associations.

The EC has adopted a strategy to shift the European economy towards greater and more sustainable use of renewable resources. The plans include converting waste streams into bioenergy, which the EC estimates could meet 2% of the EU 2020 renewable energy target. However, we are already in 2012. Can this target be achieved, especially in light of the aforementioned tariff cuts?

It is not very relevant if the goal is achieved by 2020, as long as there is a significant increase and new goals are defined over the next couple of years beyond 2020. We hope that in a next directive the European Parliament will include measures for punishment. With the actual Renewable Energy Directive, the Commission can only raise the finger, but can’t really do anything.

In an interview with Renewable Energy Magazine last year, Michael J. Turwitt (President and CEO of 2G-Cenergy) said it was realistic that Germany could cover 25% of its total electricity demand using biogas CHP facilities by 2020. Do you concur with this assumption and are any other European countries on track to achieving similar 2020 figures?

Actually Germany is at 3% and has still an easily achievable potential to double or even triple this amount.

The Energy Research Centre of the Netherlands also forecasts biogas will contribute 64 TWh of electricity in Europe in 2020; translating to around 2% of the continent’s total electricity consumption of 3,042 TWh. Is this a fair assumption or could this target be raised?

Yes, but it is very conservative.

In its Biogas Road Map for Europe published in 2009, Aebiom called for biogas to be “fully considered in the European Biofuels Technology Platform” and that incentives should be introduced across Europe to encourage the use of biogas in the transport sector. How widespread is the use of biogas in this sector and is this level of penetration satisfactory?

It is growing, however not as fast as we have been looking for. We are talking a 25% increase per year in the world and 13% in Europe. But this is not a biogas problem, it is a barrier against gas cars in general that has to be overcome. That’s why we are collaborating steadily with NGVA.

Turning to technological advances in the sector. Researchers at Aarhus University in Denmark discovered earlier in the year that by-products from the production of omega-3 fish oil in combination with cattle manure can help boost biogas output. That said, biogas technologies are generally quite mature. Do the technological solutions still need to be improved for biogas to become more mainstream and if so, in what areas?

This was not really a new finding, but more good press coverage by "innocent" journalists! The fact is that the technology of today is very well developed. It’s time for the scientists to go back to the lab and conduct basic research to enable us to understand better the behaviour of methanogens.

Lastly, do you consider that in its present form, European legislation such as the Landfill Directive and the Directive on Waste will hand the biogas sector the development opportunities in deserves?

The Landfill Directive is certainly a big help for biogas. The actual renewal of the Waste Framework Directive and the definition of waste gives us some headaches. We are collaborating very intensively with the corresponding expert groups. We have provided hundreds of digestate analysis data from all over Europe to prove that digestate has reached end of waste status. The Joint Research Centre has then analysed a large number of samples themselves.