Water and Energy: An Interview with Mads Warming of Danfoss Energy & Water 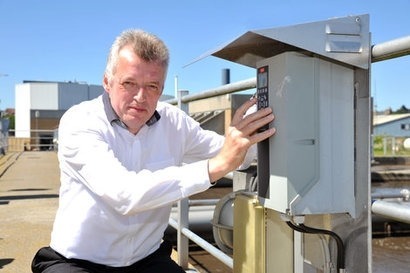 A key area of focus for the report was the interdependency of energy and water (the water-energy nexus), with a new chapter looking at how highly energy-intensive the water industry is, the impact this has on global consumption and CO2 emissions, and how we can unlock the significant, untapped scope for energy saving in this sector.

The Marselisborg area in Aarhus, Denmark (pop. 200,000) is the first place in the world that has succeeded in going from being an energy consumer to completely energy neutrality for the whole water cycle (tap water production, distribution, wastewater pumping and treatment). This has been achieved by securing massive energy savings across the water cycle, and by turning wastewater plants into net energy producers. The Marselisborg Wastewater Treatment Plant, for example, has gone from consuming huge amounts of energy to being a power station in its own right - generating enough energy to cover its own operations and up to 130 percent more.

The company that runs the water system in Marselisborg is called Aarhus Water, and many of the advanced process control and efficiency technologies that have been used to achieve this improvement have been provided by Danfoss.

REM spoke to Mads Warming, Global Director of Water and Wastewater at Danfoss, to find out more.

Tell me about Danfoss and what it does:

Danfoss is a global leader in variable speeds drives (VSDs), with sales in more than 80 countries and manufacturing in Europe, USA and Asia.  We employ over 5,000 people in this division only.

Danfoss was the first company in the world to create a dedicated VSD for the water and wastewater industries, so has accumulated a tremendous amount of experience in this area. This experience is what has helped us and our customers to achieve remarkable efficiencies across the water cycle, offering major energy and water savings as well as protecting vital assets.

How energy intensive is the water industry at the moment, and what can be, or is being, done about it?

The interdependency of water and energy is one of the biggest energy issues we will face in the next 25 years. According to the International Energy Agency’s World Energy Outlook report, published in November last year, the water industry currently accounts for 4 percent of global electricity consumption. That’s about the same as the demand from the whole of Russia, and is predicted to rise even further – potentially doubling by 2040 if immediate steps are not taken.

And this is by no means just a global issue. At a local level, water can account for anything between 30-50 percent of a municipality’s total energy bill. These are costs which ultimately get passed on to the consumer. So the energy demands of the water industry have a major impact on everyone from local governments and city planners to businesses and residents.

Where does Danfoss technology fit into this?

We have technologies that are already being used around the world to limit the energy-dependence of the water industry.  And we’re not talking about expensive, ultra-high tech gadgetry – it is simply a case of taking existing technology and deploying it in the right way.

Sensors can be used, for example, to monitor in real time the amount of water that’s being used at any point during the day, analysing everything from flow to pressure in the pipe network. Likewise in wastewater facilities, you can use ammonium, nitrates, and phosphate to analyse in real-time the biological processes that are happening within the facility.

This data can then be used to manage the flow and pressure of water round the network – primarily by using variable speed drives to regulate the speed of pumps and blowers – or to adapt wastewater treatment processes to be more effective.

It’s not rocket science, but this digitised approach – known in the industry as “Water 4.0” – coupled with the use of more efficient components, could reduce the water sector’s electricity consumption by an estimated 40 percent.

By optimising energy consumption in the water distribution system, you can also reduce water leakage by up to 40 percent. The IEA has calculated that if water leakage around the world was reduced to the same level as in leading countries such as Denmark, energy savings could be around 130 Terawatt hours (TWh) – equal to the entire electricity need of Poland.

Can you tell me more about the Marselisborg WWTP and the technology you deployed there?

They have used anaerobic digestion technology to turn the Marselisborg Wastewater Treatment Plant in Aarhus, Denmark, into a power station in its own right. Once a huge energy consumer, the plant now generates enough energy to cover its own demands and up to 130 percent more – so a total energy production of 230 percent.

The excess electricity is sold back into the grid at a profit to the water company. Excess heat – around 2.5 GW per year – is also sold into the local district heating system, providing another valuable source of income. All of this is without adding carbon from external resources, or using solar or wind energy.

The transformation of the WWTP plant from energy consumer to generator – coupled with the use of efficient, digitally-enabled technologies across the whole water distribution system – has enabled the city of Aarhus to become a world leader in water efficiency. Led by the local water company Aarhus Water, the city - Denmark’s second largest – has succeeded in achieving complete energy neutrality across the whole water cycle for a catchment area of 200,000 people. Partly this has been achieved through energy efficiency, using advanced process optimisation and sensors linked to variable speeds drives. But it has also come from embracing the potential to turn wastewater plants from major energy consumers into energy generators.

For the water company, the return on investment period has been just five years. Meanwhile, the efficiency achieved as a result of these changes has contributed to decreasing water prices for local residents – in stark contrast to what’s happening elsewhere in the world.

The Danish government is now aiming for the whole water industry in Denmark to be energy neutral. If other countries around the world did the same, we would be able to cut worldwide electricity consumption by at least 4 percent.

This equates to about the same as the electricity generated by both solar and wind power globally – a truly remarkable amount that would have a major impact both on the global economy and on carbon emissions.

What other markets, besides Denmark, are you targeting at present?

There is huge potential for this approach to be deployed elsewhere around the world – indeed, it is outside Denmark where these technologies will have the most impact.

China has the most energy-intensive water sector in the world – around one fifth of energy consumption is used for water processes – with the United States in close second. Both China and the US are showing great interest in what we’ve achieved, and companies from both countries have visited Aarhus to see how this template for success could be used in their respective markets.

This approach will have a huge positive impact on less economically developed countries as well. By 2040, almost 20 percent of countries are anticipated to experience extremely high water stress – an issue that’s exacerbated by high levels of water loss experienced across the water cycle. Because we can reduce water leakage by up to 40 percent, we could halt the flow of water loss and give a much-needed boost to regions that struggle with a lack of water.

How do you intend to develop and advance this technology in future?

The main thing that’s needed for this approach to be replicated elsewhere is a coordinated suite of policy measures to encourage governments and businesses to embrace the potential offered by energy efficiency. With these policy measures, the International Energy Agency predicts possible global energy savings of 270 TWh and the generation of an additional 70 TWh of electricity by 2040 – equivalent to around 70 large coal-fired power stations. And this is a conservative estimate; there’s no doubt we could take things even further with a full implementation of the available technologies.

The water-energy nexus is just one part of the global energy challenge. But if we could reduce the water industry’s dependency on energy even by half, we would markedly impact global electricity consumption and play a key role in reducing the strain on resources for future generations – not to mention making significant and sustainable cost-savings.

Mads Warming is Global Director of Water and Wastewater at Danfoss