Thursday, 04 June 2020
0
REM
An off-shore demonstration with game-changing implications for the future of perpetual clean energy, conducted from May 25 through 28 by OceanBased Perpetual Energy, LLC in collaboration with the Southeast National Marine Renewable Energy Center at Florida Atlantic University , has demonstrated that clean, renewable perpetual energy can be derived by harnessing the perpetual Gulf Stream current off the coast of South Florida. 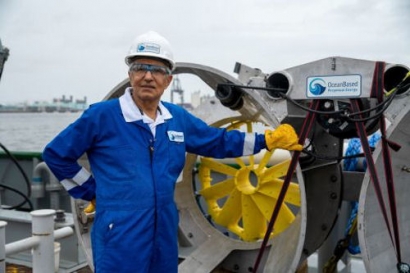 While various hydrokinetic projects worldwide focus on tidal or wave-based sources, the successful OceanBased demonstration is the first ever to yield energy from the powerful Gulf Stream for a continuous 24 hours using only the water’s perpetual flow.  The findings bode well for future development of commercial applications to harness and distribute the Gulf Stream’s energy in Florida.

After a month-long postponement related to COVID-19, the team fielded three distinct types of ocean current energy converters (OCECs), which are turbines configured for hydrokinetic use. The OCECs were submerged in the Gulf Stream current approximately 20 miles offshore between Broward and Palm Beach counties, where the powerful water’s velocity typically ranges from 3.5 to 5.5 miles per hour (3 to 5 knots) without interruption.

The team of 12 included scientists, researchers, engineers, videographers, photographers and crew aboard the Go America, a 150-foot research vessel.

“This historic demonstration shows the world that the Gulf Stream can produce clean, renewable perpetual power on a 24-hour-a-day basis using a variety of turbine concepts,” said OceanBased Chairman Nasser M.N. Alshemaimry. It is the starting point for commercializing ocean current energy in the Gulf Stream, thus reducing fossil fuel dependency and benefiting our climate and the planet for generations to come.”

OceanBased engineers mapped out how a seabed-based power substation would receive incoming electricity from the powerful Gulf Stream current flowing through the OCECs.  The electricity generated would then be transmitted through a relay substation connected by a seabed cable running 15 to 20 miles back to the seashore.  On land, an additional substation would connect to the national electricity grid or be tapped for other viable uses, such as powering hydrogen fuel plants, blockchain mining or server and data storage centers.

OceanBased formed its strategic partnership with FAU’s SNMREC in 2019 to advance the company’s hydrokinetic research into responsible marine-based power generation.  SNMREC is one of three centers designated by the U.S. Department of Energy to assist companies with the responsible development of marine renewables.

“Especially in Florida, where population continues to grow by 1,000 people per day, there is a clear need to invest in clean ocean energy technology.”