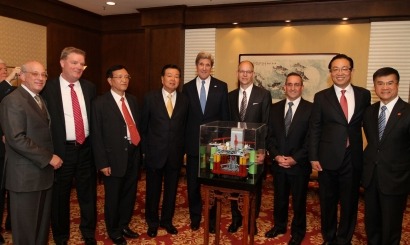 A memorandum of agreement between the two companies was signed in Beijing on Saturday. Following the ceremony, both companies met with United States Secretary of State John Kerry during his first official state visit to the People’s Republic of China.

The 10 MW offshore plant, to be designed by Lockheed Martin, will be the largest OTEC project developed to date, supplying 100 percent of the power needed for a green resort to be built by Reignwood Group.

In addition, the agreement could lay the foundation for the development of several additional OTEC power plants ranging in size from 10 to 100 megawatts, for a potential multi-billion dollar value.

“The benefits to generating power with OTEC are immense, and Lockheed Martin has been leading the way in advancing this technology for decades,” said Dan Heller, vice president of new ventures for Lockheed Martin Mission Systems and Training. “Constructing a sea-based, multi-megawatt pilot OTEC power plant for Reignwood Group is the final step in making it an economic option to meet growing needs for clean, reliable energy.”

OTEC takes the natural temperature difference found in the ocean in tropical regions and uses it to create power. This technology is well-suited to island and coastal communities where energy transportation costs typically make other sources of power very expensive. The process provides a native power source to areas, and, like other renewable energy technologies, OTEC plants will be clean, sustainable and powered by free fuel.

Unlike other renewable energy technologies, this power is also base load, meaning it can be produced consistently 24 hours a day, 365 days a year. A commercial-scale OTEC plant will have the capability to power a small city. The energy can also be used for the cultivation of other crucial resources such as clean drinking water and hydrogen for applications such as electric vehicles.

In addition to several other green energy-related projects across a variety of industries, Reignwood Group is currently developing two large scale low-carbon resort communities, with others planned in key locations in China. Using Lockheed Martin’s OTEC technology to power a new resort will help the company to develop its first net-zero community.

“Our mission at Reignwood Group is to invest in low-carbon applications and solutions, integrating these new green technologies into a plan to promote sustainable development practices,” said Colin Liu, senior vice president of Reignwood Group. “Lockheed Martin’s OTEC technology offers a ground-breaking solution that will help us to achieve this mission.”

Once the proposed plant is developed and operational, the two companies plan to use the knowledge gained to improve the design of the additional commercial-scale plants, to be built over the next 10 years. Each 100-megawatt OTEC facility could produce the same amount of energy in a year as 1.3 million barrels of oil, decrease carbon emissions by half a million tons and provide a domestic energy source that is sustainable, reliable and secure. With oil trading near $100 a barrel, the fuel-savings from one plant could top $130 million per year.