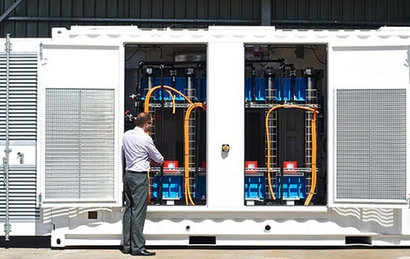 Other elements of the system include an electrolyser which has been installed at EMEC’s tidal test site on the island of Eday. It produced the world’s first tidal-powered hydrogen in August this year. Once produced, hydrogen will be stored and transported to Kirkwall where the fuel cell will convert it back into electricity for use by the inter-island ferries whilst berthed at the pier.

As it is produced from renewable electricity, Surf 'n' Turf's hydrogen is a clean fuel that causes no carbon emissions, and has many potential uses – including to supply electricity, as a transport fuel for vehicles or ships, for heating, or to make fertiliser. A key aspect of the Surf 'n' Turf project is the development of educational facilities, run by Orkney College UHI, to skill up the local community in hydrogen handling and attract trainees from other countries.

The project has received £1.3 million of Scottish Government funding through the CARES programme and Local Energy Challenge Fund.

“I enjoyed what was a fascinating visit to the Surf n’ Turf facilities at Kirkwall Harbour to see how the project in developing, utilising electricity from Eday, and to discuss its potential to go even further, through the BIG HIT project, in further establishing and growing Orkney’s hydrogen economy” said Scottish Government Minister for Business, Innovation and Energy, Paul Wheelhouse. “Hydrogen itself and hydrogen fuel cells both have huge potential in Scotland’s low-carbon energy system and we have already supported a number of world-leading hydrogen demonstration projects. We will continue to support innovation in suitable hydrogen initiatives and explore the practicalities of using hydrogen as a zero carbon substitute fuel for the heating of homes and businesses in Scotland and in transport. Hydrogen energy technologies are in the early stages of development in Scotland but there is growing global awareness of their potential in the decarbonisation of heat, industry and transport. We are actively considering what role hydrogen can play in Scotland’s future energy system as part of the Scottish Energy Strategy, and projects like Surf ‘n' Turf have a very important role to play in informing that work.”

Mr Wheelhouse, one of 70 guests travelling from as far as Malta and Spain, officially unveiled the newly installed hydrogen fuel cell at Kirkwall Pier on Wednesday 27th September 2017.

Following the unveiling of the fuel cell, a public seminar on ‘Orkney’s Hydrogen Future’ was held at the Pickaquoy Centre with a turnout of over 100 people looking to find out more about the developments taking place in Orkney around hydrogen.

Mark Hull, Community Energy Scotland’s Head of Innovation, added that the hydrogen pilot has been the best opportunity for Eday due to their location, type of grid limitations, its fantastic energy resource and the chance to power the local ferries with Orkney’s own fuel.