Tuesday, 19 July 2011
1
REM
Financial new investment in clean energy in the US jumped in the second quarter of 2011 to reach $41.7 billion. This was 27% above the figure for the first quarter and 22% higher than the equivalent for Q2 2010, according to the latest, authoritative figures from analysis company Bloomberg New Energy Finance. 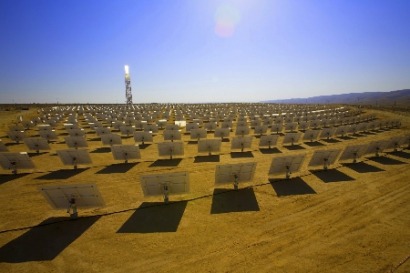 A feature of the second quarter was the financing of a string of large solar thermal electricity or concentrating solar power (CSP) projects. The second quarter saw the $2.2 billion financial go-ahead for BrightSource's 392-MW Ivanpah solar thermal portfolio in the US – the biggest such projects in the world – and other deals worth many hundreds of millions of dollars including those for the 100-MW FPL Termosol site in Spain, the 100-MW Eskom Uppington project in South Africa.

Investment in the US bounced 195% in Q2 to $10.5 billion, the third-highest quarterly figure ever for that country, thanks to a jump in the asset finance of wind and solar projects such as Alta and Ivanpah, both in California.

The figure for financial new investment in Q2 was the third highest for any quarter on record, lagging behind only Q4 2010 and Q4 2007. This buoyant performance contrasts with a lacklustre performance by clean energy shares between April and June this year. The WilderHill New Energy Global Innovation Index, or NEX, which tracks 98 clean energy shares worldwide, fell 13% in Q2 after a bright showing in the first quarter of the year.

"There continues to be an intriguing contrast between investment in clean energy, which is running very strongly in almost every part of the world, and sector share prices, which have been under-performing,” commented Michael Liebreich, chief executive of Bloomberg New Energy Finance. "The explanation is partly to do with on-going investor worries - perhaps overdone - about future policy support, and partly to do with the fact that this is a highly competitive sector, in which costs are falling and high manufacturer margins are hard to sustain."

Within the overall investment figure for the second quarter, asset finance of utility-scale renewable energy projects totalled $35.3 billion, up 30% on the first quarter. Apart from the solar thermal projects above, others clinching finance included a 400MW geothermal project in Kenya and the latest phases, totalling 300 MW, of the giant Alta Wind Energy Center at Tehachapi, California.

A second category of investment to see sharp increase in Q2 was that by venture capital and private equity players in clean energy companies. This rose 74% to $3.1 billion, the highest figure for any quarter since Q3 2008. The VC/PE deals in Q2 included $445m for Agri.capital, the German biogas specialist, and $240m for LDK Silicon and Chemical Technology, a Chinese solar polysilicon producer. Private equity expansion capital was the main type of finance driving the overall rise in VC/PE investment in the quarter.

The only major category of investment to see a fall in the second quarter compared to the first was the provision of equity capital for quoted clean energy companies. This slipped 7% to $3.4 billion, with the largest transaction the $799m initial public offering in Hong Kong of wind turbine maker Huaneng Renewables.

Looking at the geographical picture, investment rose 46% in India to $2.5 billion in the second quarter. Despite the US's spectacular increase, China was still the largest country for clean energy investment in Q2, with $12 billion - but this was down 11% on the first quarter number. Europe was up 14% at $8.9 billion, boosted by the finance of big solar thermal projects in Spain and wind farms in Austria and Spain.

In the case of the US, investment flows have been jagged, with a strong Q4, weak Q1 and strong Q2. One reason may have been a market expectation that the Treasury cash grant for renewable energy projects was on its way to expiry. In the event, it gained a reprieve to the end of 2011, but the rush of investment to qualify for the grant probably boosted the Q4 2010 numbers at the expense of the Q1 2011 figures. The grant helped to buoy the Q2 numbers, along with aggressive solar project development in California and the mid-Atlantic states. In addition, there were some projects long in the development pipeline that made important progress. In Florida, American Renewables secured $375m in debt for a biomass plant in Gainesville from a slew of foreign banks led by the Bank of Tokyo-Mitsubishi UFJ. Meanwhile, oil company Valero secured $221.3m in debt for a new biodiesel plant in Louisiana.

Merger, acquisition and refinancing activity in clean energy is not included in the financial new investment total, because it represents money changing hands rather than new finance coming into the sector. However it is an important indicator of deal flow, and it jumped 93% to $21.7 billion in the second quarter.

There were bumper-sized acquisitions and refinancing of both renewable energy projects, and of companies involved in the sector. In the latter category were the $2 billion takeover of Norwegian company Elkem, a maker of materials used in the PV sector, by China National Chemical Corporation; and the purchase of 60% of SunPower, the US-based PV module maker, for $1.6 billion by Total of France.