Friday, 10 June 2011
0
Toby Price
A report by Roland Berger Strategy Consultants y WWF (World Wide Fund for Nature) reveals that the market for clean technology will top €1,600 billion in 2020, making it the third largest industry in the world, but countries should “learn lessons” from those at the forefront of the industry in the fight against climate change: China, Denmark, Brazil.

The study entitled “Clean Economy, Living Planet: Building strong clean energy technology industries” shows that China is at the forefront of the battle against climate change, since it is the largest clean energy producer in monetary terms, with more than €44 billion, 1.4% of its GDP. The Asian giant joins Demark, Germany, Brazil and Lithuania in the top 5 spots in the world in terms of clean energy producers in terms of GDP.

The report collates data on 38 countries obtained from reports prepared by energy associations, banks, investors and International Energy Agency analysts, and is the first ever comparison of countries on the basis of sales of their clean technology products. It provides clean recommendations for countries to follow in the footsteps of these leaders, and includes the 27 EU member states and all G7 and BRIC countries and the major renewable energy and energy efficiency segments. 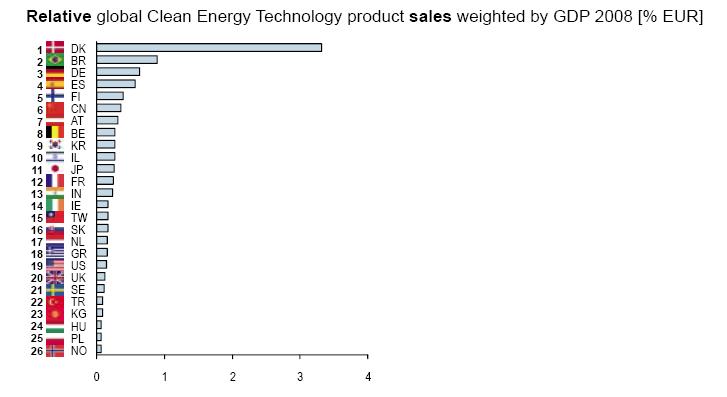 The worldwide market for clean energy technology is growing fast. Between 2000 and 2008 wind energy was growing worldwide with 24% a year, biodiesel with 31% and solar with 53%. The study found that with a total volume of €630 billion, the market for clean technology was larger than the pharmaceutical industry in 2007, and will be the third industrial sector in the world in 2020 (€1,600 billion).

Sales form energy efficiency products was €540 billion, and renewable energy technologies contributed €91 billion. Despite the crisis, it is expected that this growth will continue with 5% a year for efficiency and 15% for renewables (in a conservative IEA 450 scenario). This will result in a total market volume of €1,600 billion a year in 2020, making it one of the largest industries in the world.

WWF made the first ever country ranking based on clean energy technology sales and it is topped by Denmark, Brazil and Germany If you look at relative income from sales (weighted by GDP), Denmark, Brazil and Germany are ranking highest. The Danes are world market leader in wind turbines and insulation, with which they are number one. Brazil is at number two because of her large-scale production of bio-ethanol. Germany has a long tradition in building machinery and equipment which made a good basis for her clean technology industry. Germany excels in several technologies, particularly in wind- and solar energy.

Roland Berger Strategy Consultants have added all segments of sales of clean tech products and services to yield an aggregate country ranking by sales. “A country’s position in the ranking reflects its ability to produce and sell products and services that reduce carbon dioxide emissions. High ranking countries also generate high economic value and employment for a skilled workforce,” explain the authors of the study.

Denmark, Brazil and Germany lead the ranking. China is the sixth largest. On the basis of an analysis of these sector leaders and interviews with international experts, the authors of the report identify a number of success factors as “lessons learned”.

Analysing the success of the top-4 countries in clean energy technology– Denmark, Brazil, Germany and Spain – it was found that they share three distinct key success factors:

• Early and consistent government support over the innovation cycle;

• High investment in sectors with a strong domestic fit; and

Research is critical to achieving this success, with Brazil being a perfect example. Since the 1970s the country has focused on raising the yield of sugar cane and improving the efficiency of ethanol plants. Public research centres initiated the development of full ethanol and flex fuel vehicles, which was later taken up and accelerated by (private) industry. The government also strongly stimulated the development of a home market through mandatory blending and price support.

Wind and solar innovation in Europe

The same holds for Denmark and Germany. In 1977, Denmark set up a comprehensive program for wind energy R&D at the Risoe National Laboratory and the Technical University of Denmark. The government gave strong (financial) support to the testing of prototypes and since the early 1980s stimulated an early home market with investment subsidies for wind parks and feed-in tariffs. The German government has likewise stimulated the home market for wind and solar energy, invested in wind and solar demonstration projects and set up government funded R&D programs targeting business and academia.

A common characteristic of these countries is that they started their development during the oil crises in the 1970s. Absence of natural resources in the form of oil and gas created the incentive to find alternatives. The controversy surrounding nuclear energy in the 1980s has led to a reinforcement of governments’ renewable energy policy.

Capital is a necessary, if not sufficient, condition for building a clean energy technology industry. In Denmark, Germany and Spain strong sales in clean energy technology are correlated with high investments in technology and private equity. Particularly in Denmark and the US, companies are accelerated by venture capital. In Germany, many small and medium sized, family-run businesses invested in the field. Also in Germany and in Spain, large corporations like Siemens and Abengoa provided capital for expansion to successful innovators. Most investments in these countries were made in segments with a strong domestic fit, i.e. the same technologies that benefitted from government support throughout their innovation cycles.

Last, but not least, a strong home market is indispensible. It allows companies to experiment, gain experience and quickly traverse the learning curve – both giving them a competitive lead and providing them with reference and showcase projects. For smaller countries, this means benefitting from a first mover advantage. Denmark captured first mover advantage in wind in the early 1980s and its Clean Energy Technology sales in wind were driven by the domestic demand for wind energy it established early on. Other early movers in wind, like Spain and Germany, demonstrate the same effect. Sweden is a front-runner in heat pumps since it installed the first in 1979, Brazil has led the ethanol market since the early 1970s and Austria has been the European leader in solar thermal applications since the end of that decade.