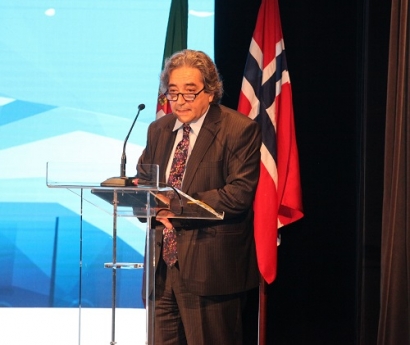 New developmental pathways are being geared towards sustainable use of the marine environment by maximizing use of ocean space while reducing costs through shared infrastructure.

Experts from Norway and Portugal joined forces to stage the special event led by WavEC Offshore Renewables, in collaboration with the Norwegian Embassy and Innovation Norway.

WavEC President António Sarmento, said, “The seminar provided insight from world-leaders across many marine renewable energy segments and other business opportunities in the ocean.

“While we understand the immense benefits which can be derived from wind, wave and solar power as individual technologies, their potential may be  greatly magnified when combined. For instance, wave power offers a complementary seasonal profile to wind and solar which is more responsive to specific conditions. In this respect, combined platforms and arrays present an opportunity to significantly reduce costs and increase output by dovetailing variations in resource availability. This innovation can crucially help balance the grid and increase the reliability and viability of renewable energy.”

Portugal and Norway are widely considered as front runners in marine renewable energy. In May 2016, all of Portugal's electricity was produced renewably for more than four concurrent days largely supported by wind and hydropower - a landmark achievement for a modern European country.

Meanwhile, Norway is Europe's largest producer of hydropower and the 6th largest in the world.

The seminar heard that the global offshore wind market is set for rapid expansion according to Oslo-based Norwegian Energy Partners (Norwep). Figures from its 2019 report predict the worldwide fleet will swell to 85GW, with yearly capital expenditure reaching around €50 billion by 2024 - compared to a forecast of €26 billion by the end of 2019.  Near-term growth is being driven by major build-outs in Asia and the US East Coast market.

Meanwhile, floating offshore wind technology is helping redefine the market, with huge geographical flexibility and growth potential compared to more restricted bottom-fixed offshore wind assets. But as offshore wind moves into deeper water and harsher environments it will require greater engineering innovation and expertise – which is likely to emanate from the more established oil & gas sector.

Additional focus on the aquaculture market opened debate on preservation of the ‘blue forest’ helping reverse acidification across oceans and build depleted fish stocks. Crucially, sea forests including seaweed, seagrass and mangroves are five times more efficient at ‘carbon capture’ than on-land tropical forests. However, the ‘blue forest’ is being destroyed by pollution, ocean heat waves and other factors, as the planet catapults towards increasingly rapid environmental degradation.

Delegates heard that the restoration of underwater forests is a crucial step to mitigating climate change and limiting the loss of global biodiversity.

WavEC launched its first major study in 2004 and has since delivered more than 50 R&D projects - seeing more than €10 million of funding invested in the marine renewable energy sector - working in collaboration with more than 250 partners in 25 countries.