Tuesday, 01 March 2011
0
Toby Price
EurObserv’ER has released its annual review “The State of Renewable Energies in Europe”. While the data analysed is from 2009, the findings of the report are revealing, showing that EU-27 renewable energy share increased to 11.6% from 10.4% in 2008 and that the sector employed nearly a million people. However, more still needs to be done, EurObserv’ER concludes. 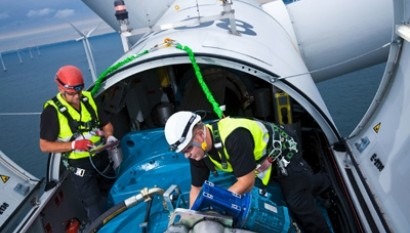 The State of Renewable Energies in Europe is a synthesis of the Technology Barometers published by EurObserv’ER during 2010 (with data up to and including 2009). The publication gives detailed capacity and energy performance data for all 27 Member States of the European Union (for wind power, photovoltaics, solar thermal energy and solar thermal electricity, small hydropower, geothermal energy, ground source heat pumps, biogas, biofuels, municipal solid waste, solid biomass and ocean energy).

EurObserv’ER claims it is the “first in disclosing an estimate for the renewable energy share of gross final energy consumption in 2009”, which it has calculated at 11.6% compared to 10.4% in 2008. This increase of 1.2 percentage points results in a renewable energy consumption contribution of 131.7 million tonnes of oil equivalent (Mtoe) in 2009 (up 6.3 Mtoe) of a total of 1136.4 Mtoe in real terms.

Nonetheless, EurObserv’ER estimates that for the year 2009 the renewable energy share in total primary energy consumption has only gained 1 percentage point with respect to 2008 (from 8.4% to 9.4% in 2009), which means that despite continuing progress, the 12% targeted by the European Commission's White Paper on renewable energy sources published in 1997 will not be achieved.

In her forward to this latest EurObserv’ER report, Virgine Schwarz, Executive Programme Director from the French Environment and Energy Management Agency (ADEME) says “The main reason for this failure is that the efforts to reduce consumption have not matched the efforts to develop renewable energies”. Schwarz goes on to stress that Europe must now turn its sights to the new Directive’s target for 2020 passed in 2009 and ramp up renewable production and energy savings.

The authors of the report are, however, more upbeat. “Despite the exceptional situation arising from the drop in energy consumption, the results for 2009 demonstrate that the efforts made by most of the Member States of the European Union in favour of renewable energies are bearing fruit,” they say. Indeed, from a social perspective, this certainly seem to be the case, with EurObserv’ER estimating that the sector employed 912 thousand people and had a turnover of €120 billion in EU-27 for the year 2009.

Alain Liébard, President of EurObserv’ER, also believes 2010 was a year when renewables came of age, despite new challenges emerging as a result of the global recession. “The first European directives issued at the beginning of the 2000s set in motion what is now an unstoppable movement. Not only have the renewable sectors arrived, they have become the very cornerstones of national energy and economic policies,” he claims.

A closer look at the specific segments of the renewable energy sector certainly show how it is maturing. EurObserv’ER reports that the European Union’s wind power market set a new installation record with more than 10,000 MW installed in 2009 in spite of the recession.

If decommissioned installations are subtracted from the figures, the wind turbine base rose to 75 124.9 MW including 1 913.8 MW offshore. Spain and Germany confirmed their dominance of the wind power market. Most of the other mature markets such as Italy, Portugal, Sweden, Ireland and Belgium kept up their momentum, while France and the United Kingdom flattened out.

Offshore projects ensured that the Danish market was revived in 2009. Another good piece of news is that some of the Central European markets built up capacity such as Poland, Hungary, Estonia and Bulgaria. However other markets including Austria, the Netherlands and Finland appear to be more or less in the doldrums.

During the course of 2009, 5685.1 MWp of photovoltaic capacity was installed in European Union, which is 11.9% more than in 2008, raising accumulated capacity to 16 071.2 MWp. “Germany’s new installation record and the build-up in capacity by the new major photovoltaic solar markets managed to ring-fence the shock wave generated by the clampdown on the Spanish market,” explain the authors of The State of Renewable Energies in Europe.

Mean per capita capacity now stands at 32.1 Wp compared to 20.8 Wp in 2008. The old continent remained the top global market destination for photovoltaic in 2009, as over three-quarters of the installation volume (of an estimated global market of 7.5 GWp) was based there. As a result, the European Union was the main solar electricity production zone generating around 14.7 TWh in 2009, as against 7.5 TWh in 2008.

Despite PV’s progress, the recession has finally got the better of the European solar thermal market’s euphoric expansion. The annual solar thermal surface installed over the twelve months of 2009 across the European Union countries was about 4.17 million square metres (that equates to 2.9 GWth of thermal capacity), which represents a 9.6% year-on-year decrease on 2008 when the installed surface was almost 4.61 million square metres.

Primary energy output from solid biomass combustion however rose in 2009 yet again to a new height of 72.5 Mtoe, which equates to a 3.2% increase on 2008, by adding 2.2 Mtoe. The reason for this exploit, which prevailed over the tight economic context, is the resolve made by many countries to rely on this energy to achieve their European electricity or heat production target levels.

Moving away from the more established renewable energy sources, EurObserv’ER found that the number of operators developing offshore ocean energy pilot plants is growing and they are getting closer to the pre-commercial phase. It was found that this segment tends to harness the two most buoyant sub-sectors – current energy and wave energy, while major industrial groups and energy suppliers such as EDF, GDF Suez, Voith Hydro, Alstom, Dong Energy, Vattenfal, Statkraft, E.ON, Acciona and Iberdrola are coming aboard.

The United Kingdom and Scotland in particular have a comfortable length’s lead on the rest of Europe. According to RenewableUK, 2.4 MW of capacity was in service in autumn 2010, equating to 2.5 GWh of an annual production capacity. There is little doubt that the UK’s commitment to ocean energy with the development of test infrastructures such as EMEC (the European Marine Energy Centre) and Wave Hub are adding to the growth of this nascent industry.

Despite this, the report’s authors warn that companies are faced with dwindling funds because of the economic and financial crisis, making for a mixed picture. “The developers will have to remove many of the technical and financial uncertainties to convince investors,” they advise.

The EurObserv’ER Barometer regularly publishes indicators reflecting the current dynamics in renewable energies (solar, wind, hydropower, geothermal and biomass, biogas, biofuels) worldwide and within the European Union. Renewable Energy Magazine will be reporting on the latest release (looking at the wind industry) tomorrow.