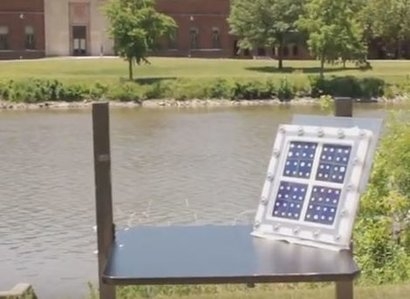 HyperSolar, Inc., the developer of a breakthrough technology to produce renewable hydrogen using sunlight and any source of water, has announced it has completed its largest prototype to date, a one square foot unit that is capable of producing hydrogen in a completely renewable process.

The prototype was completed with the key objective of demonstrating how the technology can be scaled up while remaining highly productive. A key challenge in maintaining the hydrogen production efficiency in a scaled-up device is managing the increased solution transport losses from one side of the cell to the other. HyperSolar uses its patent-pending process that substantially reduces the solution transport losses, thereby maintaining the efficiencies of hydrogen production in a large solar cells-based device.  As the Company continues to increase the size of its working prototype, it can effectively showcase to future partners and customers its potential for real world application, such as a hydrogen fuelling station or in the warehouse of a big box retailer. The latter of which has become more commonplace in American business, as evidenced by ongoing hydrogen fuel technology implementation at e-commerce titans Walmart and Amazon.

“With this demonstration and further improvements in stability and efficiency through innovations in catalyst integration technology, we believe our prototypes can soon be commercially viable” said Dr. Joun Lee, HyperSolar chief technologist.

Demand for hydrogen has increased significantly in the last three years with fuel cell vehicles and power equipment coming to market from large auto manufacturers like Honda and Toyota and fuel cell makers like Plug Power. To date however, over 95 percent of hydrogen produced still uses a method utilising natural gas, a fossil fuel. HyperSolar’s process is completely green and sustainable and can be deployed off grid.

“The demonstration of this working prototype represents a significant milestone in HyperSolar’s quest to produce completely renewable hydrogen at or near the point of distribution” added Tim Young, CEO of HyperSolar. “We have executed on the key objective of successfully scaling our technology and safely producing increased volumes of renewable hydrogen. By establishing our ability to grow in size without reducing efficiency, we will turn our attention to incorporating processes and materials that will also reduce cost. If successful, we believe the potential for identifying partners to support bringing the technology to scale, as well as eventual commercialization, will continue to become more realistic.”

HyperSolar’s primary research is focused on developing a completely renewable, low-cost and submersible hydrogen production particle that can split water molecules using the power of the sun, emulating the core functions of photosynthesis. Each particle is a complete hydrogen generator that contains a novel high voltage solar cell bonded to chemical catalysts by a proprietary encapsulation coating.

Tags: Hydro ,Hydrogen ,Solar ,Fuel ,Efficiency ,Fuel cell ,SAF ,Transport ,Grid
Add a comment
Martin
Well, that\'s great. Very neat. What efficiency does it make H2 at? But, more importantly... what are we going to do with the hydrogen?
storage