Friday, 28 September 2012
0
REM
The UK is a long way off the standards set by the world's leading proponents of renewable energy, argues window treatments specialist, Direct Blinds. The company has produced a map using the typical energy rating system to rank the ecological standards of major nations around the world: those forming the G20, as well as the top ten leaders in renewable energy and carbon dioxide emissions. 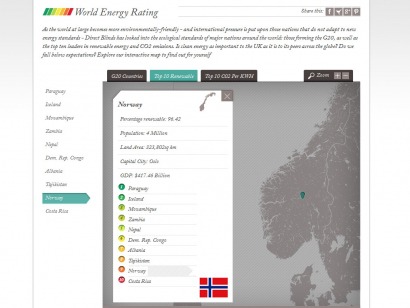 While many countries have made giant strides in the transferring their energy economies to renewable power, the UK is falling far behind. In the World Energy Rating infographic, window treatments specialist Direct Blinds has revealed that the UK is not only being outperformed on the renewable energy front by many other G20 nations, but also by supposedly 'less-developed' countries.

With data gathered from the Yale Center for Environmental Law and Policy, Direct Blinds has ranked the top ten countries in the world with the highest percentage of energy production coming from renewable sources, as well as the ten countries which produce the least carbon dioxide for each kilowatt-hour of energy generated.

Paraguay was top of both lists, as with all of its power needs coming from hydroelectricity it produces no carbon dioxide per unit of energy. Norway and Iceland can also boast renewable energy provision that almost completely meets their needs, but so too can Mozambique (99.92 per cent renewable energy provision), Zambia (99.69 per cent) and the Democratic Republic of Congo (99.5 per cent).

For comparison, the Direct Blinds infographic also provides the same data for the G20 nations. While the UK's carbon output per kilowatt-hour sits in the middle of the scale for the G20, just 3.92 per cent of its energy output comes from renewable sources, with only South Africa and South Korea offering lower proportions.

With the UK producing so little renewable energy, homeowners wanting to reduce their own carbon footprint should look at ways to reduce the amount of energy they use. This includes fitting insulation, double glazing and energy-saving blinds which help to retain heat in the home.

Nic Swift, Joint Director at Direct Blinds, comments: "Our infographic shows just how far the UK is lagging behind other countries across the world when it comes to energy production.

"While the onus is on the government to change the make-up of the UK's energy supply, individuals can do their bit by retaining heat in their properties and reducing their energy consumption. This will also mean big savings on energy bills too."