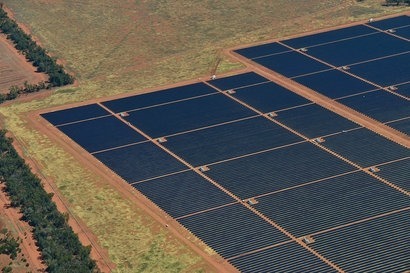 The solar plant now has close to 350,000 solar PV panels generating up to 25 MW of electricity. This will increase to 102 MW over the next three months as the plant’s remaining three sections are brought online and the entire plant is completed. This will be enough energy to power 33,000 homes per year.

The project is part of the AGL solar project which is supported by $166.7 million from the Australian Renewable Energy Agency (ARENA) and $64.9 million from the New South Wales (NSW) Government. This project will see new solar plants constructed in Nyngan and Broken Hill with a combined generation capacity of up to 155 MW. First Solar has been engaged as the engineering, procurement and construction (EPC) contractor for the project and will build the power stations using thin film PV technology. It will also maintain the facilities for an initial five year period following construction.

“The AGL solar project will make similar plants more competitive in Australia by helping to break down financial, regulatory and technical barriers” said Ivor Frischknecht, CEO of ARENA. “In addition to creating jobs, boosting skills and contributing to local communities, the development of utility scale solar is vital to a diverse energy future.”

Mr Frischknecht congratulated AGL and First Solar on the development which employed more than 250 people on site during its construction phase. Additionally, business and residents in the Nyngan area and wider Orana region have benefited from local procurement and employment throughout construction.

AGL Group General Manager Merchant Energy, Anthony Fowler, added that the completion of the first section of the plant is a significant milestone for Australia’s largest solar energy project. The company is currently the largest ASX-listed owner, operator and developer of renewable energy generation in Australia. Over the last ten years it has invested more than $3 billion in renewable energy projects.

According to Environment Minister Rob Stokes, the NSW Government is strongly committed to the transition to renewable energy, aiming to lead the country in clean energy development. Mr Stokes said that there are an estimated 13,000 jobs supported by renewable energy in NSW, mostly in regional areas and that that renewable energy generation in the state has doubled over the last decade. The development of projects in regional NSW has the potential to provide traditional farming communities with alternative income streams that are not rainfall dependent.