Solar capacity jumps by more than half in developing nations 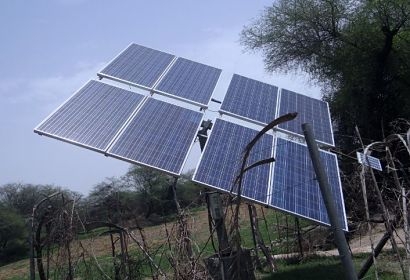 In a comprehensive new study of clean energy activity in key developing nations, the Bloomberg New Energy Finance (BNEF) annual Climatescope survey found a total of 34 gigawatts of new solar-power generating capacity came on line in 2016 in 71 emerging market countries, up from 22 gigawatts in 2015 and 3 gigawatts in 2011. Total cumulative solar capacity grew 54 percent year-on-year and has more than tripled in three years. The capacity added in 2016 alone would meet the total annual electricity demands of 45 million homes in India, or of every home in Peru or Nigeria.

The majority of this growth, 27 GW, was added by China. India added 4.2 GW while Brazil, Chile, Jordan, Mexico, and Pakistan along with nine other nations more than doubled their PV capacity in 2016. Overall, solar accounted for 19 percent of all new generating capacity added in countries surveyed by Climatescope last year, up from 10.6 percent in 2015 and 2 percent in 2011.

The deployment of PV in microgrids pay-as-you-go battery/lantern systems, water pumps, and mobile phone towers is proliferating. In many cases, these deployments have flourished organically, without support by government and often led by entrepreneurs and venture capitalists. Start-ups have often taken the lead, securing finance from private sources and establishing partnerships with large corporations such as telecom providers.

More than 1.5 million households in Africa now use solar home systems that were bought on a mobile-money enabled financing plan, up from just 600,000 at the end of 2015. This model is no longer niche in Africa’s solar financing market and it has closed some of the largest deals this year. The combination of solar power, end-customer financing and smart technology is spreading beyond homes into farms and connectivity hubs. For instance, the number of solar irrigation pumps installed in India has reached 128,000 in May, up from just 12,000 in April 2014.

“The massive drop in photovoltaic module prices we’ve seen over the last several years continues to reverberate through developing countries” said Ethan Zindler, Head of Americas for BNEF. “It's creating opportunities ranging from multi-million dollar projects that serve the grid, to small-scale installations that enable farmers to boost their yields through better irrigation and to connect to the Internet.”

Climatescope is a detailed, country-by-country quantitative assessment of clean energy market conditions and opportunities of nations in South America, Europe, Africa, the Middle East, and Asia.  The71 countries assessed by the survey account for 32.5 percent of global GDP and 72.4 percent of global population, as well as the vast majority of economic activity across all non-OECD nations. It is based on 43 data indicators and 179 sub-indicators. BNEF determines scores for each nation on a 0-5 rating system and then ranks them.

However, despite the solar surge, this year’s survey included some troubling findings. For the first time since Climatescope was launched four years ago, the average country score fell year-on-year. Nations sampled collectively scored 1.35 in last year's survey (out of 5). That average fell to 1.19 this year, though the figure was skewed somewhat with the addition to the survey of 13 new nations from Central Asia and Europe, many of which scored low. The lower scores were attributable to lower clean energy investment and lackluster progress on policy-making.

China topped the survey once again. The country remains the world's single largest market for clean energy development, but saw new asset (project) investment fall by $36.6 billion year-on-year. Seven of the top 10 ranked nations scored lower this year than in the prior survey. Brazil, Jordan, Mexico, India, South Africa, Chile, Kenya, Uruguay and Vietnam comprise the rest of the top 10.

The study was released at the BNEF Future of Energy Summit in Shanghai.