Friday, 30 March 2018
0
Robin Whitlock
Barn Energy, the company that developed and owns three of the largest river hydro projects to be built in the UK in the past 20 years, has deployed battery units alongside two of them. 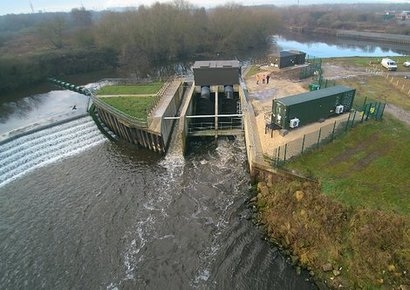 The two new battery units have been installed at Thrybergh, on the Rover Don near Rotherham and at Knottingley, on the River Aire near Wakefield. It is the first time that battery storage units have been deployed in the UK in combination with low-head river hydro schemes. Barn Energy worked with its sister company, Eelpower Limited, to deliver the two schemes. The two companies are planning to install another battery storage unit at Barn Energy’s Kirkthorpe hydro scheme (500kW capacity) on the River Calder, 10 miles west of Knottingley, later this year.

The lithium-ion battery units have been manufactured by Chinese company BYD and installed by Anesco. Each battery has a capacity of over 1200 kWh. They are both currently currently delivering on a two-year contract to deliver Firm Frequency Response (FFR) for the National Grid. The batteries will also seek to export over TRIAD days, multiplying Thrybergh’s output by five times its original capacity (260 kW) and Knottingley’s (500 kW) by 2½ times. TRIAD is a charging system that has been in operation since the early 1990s. It is targeted specifically at large industrial and commercial users and is part of a process in which peak electricity demand is identified at three points during the winter, the aim being to minimise energy consumption.

“By co-locating the battery units with hydropower, 60-70 percent of the battery consumption (when performing grid balancing services such as FFR) is provided for by hydropower and the rest comes from the grid” said Mark Simon, Chief Executive of both Barn Energy and Eelpower Limited. “This is a significant benefit for the economics of our battery, and of our hydropower station.”

Erik Nygard, CEO of Limejump, added that partnering with innovative companies, like Barn Energy and Eelpower, that are committed to developing sustainable energy infrastructure is a cornerstone of the Limejump vision. Opening up market access to these renewable installations and using the company’s Virtual Power Plant platform to maximise value will help deliver a fully sustainable energy future.

Both batteries were pre-qualified for the recent Capacity Market auction but chose not to take the February 2018 exit price.