CSP: “a win-win situation” for North Africa and Europe

Wednesday, 02 March 2011
1
Toby Price
A Fraunhofer Insitute study shows concentrating solar power (CSP) offers huge potential for industry in the Middle East and North Africa (MENA). The Institute provides a detailed roadmap for local industry in countries such as Egypt and Algeria to help them realise this potential. 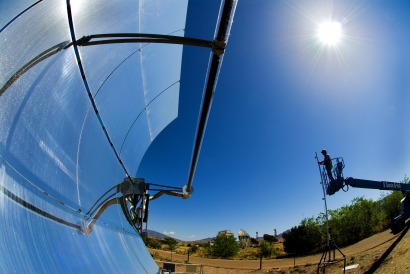 So far, CSP plants have been constructed mainly in Spain and the US, even though North Africa and the Middle East actually have the biggest global application potential and thus the largest opportunities for this technology. Thanks to their great solar resources, a new study on behalf of the World Bank by the Fraunhofer Institute for Systems and Innovation Research ISI and the Fraunhofer Institute for Solar Energy Systems ISE shows that the MENA region stands to profit greatly from the expansion of CSP capacity in the future.

The background to the study entitled “MENA Assessment of Local Manufacturing Potential for Concentrated Solar Power Projects” conducted in cooperation with Ernst & Young. is the World Bank’s Clean Technology Fund (CTF), which is supporting the development of solar thermal power plants in MENA countries. While the study’s results indicate that European plant manufacturers and technology providers are already very interested and ready to get involved in North Africa and countries of the Middle East, the CTF will also be used to help finance new power plants in the MENA region, develop a local CSP industry as well as attract additional investment and allow MENA countries to participate in the global expansion of renewable energies.

“The success and acceptance of solar power plant construction in the five countries examined (Egypt, Algeria, Jordan, Morocco and Tunisia) depend heavily on the integration and participation of local industry,” says the Fraunhofer Institute which worked together with industry in North Africa and Europe, to analyse the CSP value chain, the production processes of a solar thermal plant’s core components and the industry potentials in the MENA countries.

An action plan to realize local production capacities was then drawn up in the form of a roadmap, which Mario Ragwitz, who headed the study at Fraunhofer ISI, emphasises is able to tap a large potential of the local value added and the turnover and jobs associated with this.

The study results indicate that the local value added for CSP plants in the MENA region can reach up to 60 percent on average. Christoph Kost, head of the study at Fraunhofer ISE, estimates the effect due to local value added in the region to be 14.3 billion US dollars if sustainable, long-term demand is created. 60,000 to 80,000 new jobs, some of them highly qualified permanent positions, can be created in the MENA region by 2025.

Countries stand to profit from the development of production capacities and extensive infrastructure construction projects in the field of renewable energies if they exploit their regional advantages and dismantle market barriers. European plant manufacturers and component suppliers also see large growth opportunities in this market in the medium term. Europe and MENA both stand to benefit from the enormous solar power potential of the region via new markets for the companies of the two continents.

The results of the study were presented to the Egyptian Energy Minister at the end of September in Cairo and communicated and discussed at a workshop attended by more than 120 local and international industry representatives, government officials from the five target countries and project partners.

CSP developers planning new plants in the MENA region in the future would do well to look at new findings released by CSP Today this month which suggest that 150 MW is the ideal size for CSP plants. The new Concentrated Solar Power Parabolic Trough: Cost & Performance Report looks at how the development of larger than 50 MW CSP plants in the US (from 100 to 280 MW) has revealed cost saving benefits. “When increasing plant capacity, the relatively lower cost of components will contribute to a lower Levelized Energy Cost (LCOE),” says CSP Today. “This is because suppliers will be able to provide better prices for components, due to higher volume purchases.”

However, Carlos Márquez, Head of Research at CSP Today, warns that while scaling up the plant size will lead to a general decrease in the LCOE mainly due to power block savings ($/MW), “the impact of plant size on other factors such as parasitic losses and operations and maintenance (O&M) cost may not be well understood”.

Knowing how to achieve the most energy at the lowest cost from parabolic trough CSP is vital as parabolic trough accounts for more than 98% of total operating CSP plants and 70% of plants under construction.

Tags: CSP , Solar , Africa , Europe , Jobs , Saving , Solar thermal , Concentrating solar power , Spain
Add a comment
Sim
A very comprehensive and informative post indeed... :) Well, with the growth in the solar energy market, the growth of CSP plants is slowly spreading to far off regions of the globe. Thanks to companies like Siemens to name one, which has an insightful understanding in Concentrated Solar Power business globally. In CSP, Siemens has the parabolic trough technology, which is the most commercially established technology in the world with over 80% of solar thermal plants across the world using it.
biofuels