Tuesday, 19 February 2013
0
Robin Whitlock
The terminal, the first purpose-built offshore wind harbour in the UK or Ireland, will be used to help service a market valued in excess of £100bn 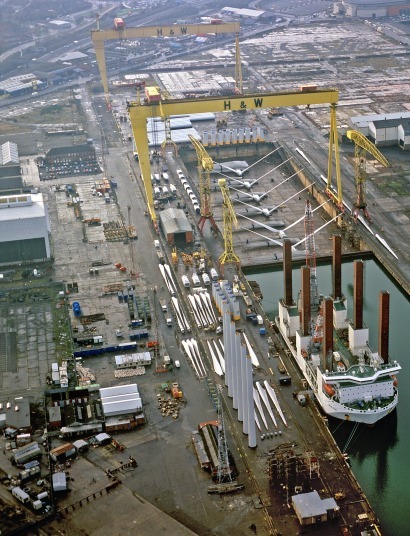 Belfast Harbour has handed over its new £50 million offshore wind terminal to DONG Energy and ScottishPower Renewables in a move which will create up to 300 jobs in trades such as welding, electrics and engineering. The official hand-over was attended by Northern Ireland’s First and deputy First Ministers, Peter Robinson MLA and Martin McGuinness MLA alongside Len O’Hagan, Belfast Harbour’s Chairman and Brent Cheshire, DONG Energy’s UK Country Chairman.

The harbour will initially be used to support the development of the West of Duddon Sands windfarm in the Irish Sea which is a joint venture between Scottish Power Renewables and DONG Energy. Work on this windfarm has already started and the harbour has already received its first shipment of components with the expectation that the first turbines will leave Belfast sometime this summer for erection at the site.

“Delivering this immense project on time and on budget has been a major achievement” said Len O’Hagan. “This is a historic development for Belfast which has the potential to usher in a major new industry for Northern Ireland – a development which is all the more poignant given that this is the Harbour’s 400th anniversary year. Over the years the Harbour has helped bring other industries to Belfast such as shipbuilding and aerospace by investing heavily in infrastructure and land reclamation. This is a continuation of that strategy and a demonstration of our long-term commitment to enhance the local economy.”

The new terminal covers 5- acres and is located on the County Down side of the port. It is the largest single investment in the harbours 400-year history and was built by local construction company Farrans. The project took 15 months, 750,000 man hours, one million tonnes of stone and 30,000 tonnes of concrete to complete. It is large enough to accommodate 30 football pitches and includes a 480 metre deep-water quayside. Up to three vessels will be able to berth simultaneously with access available around the clock.

Brent Cheshire, DONG Energy’s UK chairman commented that the provision of a bespoke facility will help the company to plan its offshore construction very effectively while helping to lower the cost of offshore wind farms. The site is in an excellent strategic position given that DONG Energy has several wind farms under construction in the Irish Sea. Keith Anderson, the CEO of ScottishPower Renewables added that the installation is one of the most advanced facilities anywhere in the world for the assembly of offshore wind turbines and that its opening marks a significant milestone for the West of Duddon Sands project.

Altogether, over 100 turbines, each having a rotor length of 120 metres will be shipped from the terminal to the wind farm which will be one of the largest wind farms in the world when commissioned in 2014. A quarter of the UK’s planned 11,000 new offshore wind turbines will be deployed within 150 nautical miles of Belfast