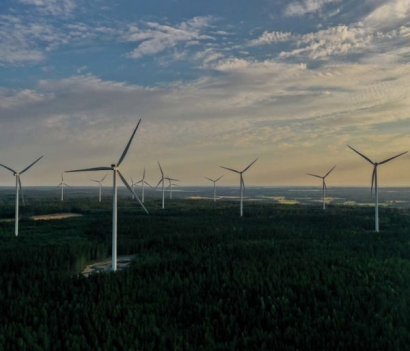 The project in County Cork is Ireland’s first-ever wind farm to be built without public subsidies and is the first of three utility-scale renewables projects invested in by Amazon.

The company has also invested in wind farm projects in County Galway and County Donegal, both of which are due to become operational in 2022.

“Amazon has been investing and growing in Ireland for over 15 years,” said Mike Beary, AWS Ireland Country Manager. “We are building a digital economy for the future that is robust and sustainable.”

“Our wind farm in Esk is not only an important step in our journey toward powering our operations with 100% renewable energy, but also in Ireland’s journey to meeting its 2030 renewables targets,” said Kenneth Matthews, Head of Energy, EMEA, Amazon Web Services.

“With these three projects, we will be the largest single corporate buyer of renewable energy in the country, and we won’t stop here. You can expect to see us announce more renewables projects in future.”

In September 2020, the company announced its 91 MW wind farm project in Bäckhammar, Sweden had begun to supply energy to the grid, followed by the 149 MW Cabrera solar project in Seville, Spain, which will provide enough energy to power 30,000 Spanish homes.