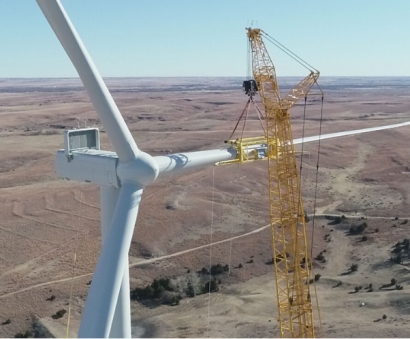 Clorox first achieved 100% renewable electricity for its U.S. and Canada operations in January 2021 – four years earlier than originally planned – when its first VPPA with Enel Green Power North America went into ffect, covering about half its electricity needs at the time.

To achieve and maintain this goal, Clorox has been purchasing renewable energy credits (RECs) on the open market to cover the balance of its electricity needs. Based on the company's current and expected electricity demands in the U.S. and Canada, this second agreement is intended to replace the need to purchase RECs from the open market when it goes into effect.

By entering into a second VPPA, Clorox is demonstrating its long-term commitment to match the electricity needed to power its operations with 100% renewable energy and helping to expand renewable energy infrastructure in the U.S.

"We know taking action on the climate crisis is necessary to ensure the well-being of our stakeholders, our planet and our long-term success as a company. As we live up to our purpose to champion people to be well and thrive every single day, contributing to a clean world is a must," said Michael Ott, Clorox's head of sustainability.

"We also know change needs to happen urgently and at scale. That's why we are committing to large, multi-year renewable energy projects to help drive the transition to a more sustainable energy system."

The 47 MW VPPA is a 12-year commitment to purchase renewable energy generated and delivered to the electricity grid from Enel Green Power's 25 Mile Creek wind farm in Oklahoma. The 250MW project is currently under construction and is expected to create over 350 local jobs during construction, in addition to around 10 permanent full-time positions.

The wind farm is expected to come on-line at the end of 2022, with Clorox's agreement coming into e ect on January 1, 2023. At that time, Clorox will purchase nearly 20% of the power generated by this facility.

By matching 100% of its U.S. and Canada electricity needs with renewable sources, Clorox is reducing nearly 160 thousand metric tons of CO2 emissions each year, based on its 2020 electricity consumption. This is equivalent to the annual impact that 189,000 acres of U.S. forest can provide in removing CO2 from the atmosphere, or the carbon impact of the electricity needed to power 31,000 U.S. homes annually.

Clorox's renewable electricity goal supports progress toward its 2030 science-based targets to reduce greenhouse gas emissions and 2050 commitment to net zero emissions. The company's ESG commitments are embedded in its corporate strategy called IGNITE and are focused where the company believes it can have the greatest impact: Healthy Lives, Clean World and Thriving Communities.

Schneider Electric advised Clorox on this virtual power purchase agreement and supported the company in its project selection, analysis, negotiations and deal execution.