Wednesday, 14 April 2021
0
REM
On April 13, 2021, on the sidelines of the International exhibition TransRussia-2021, Delo Group, Russia’s largest transport and logistics holding, and Atomenergoprom, a Rosatom company, signed an agreement for joint actions to promote switching of logistics terminals to low-carbon energy sources. 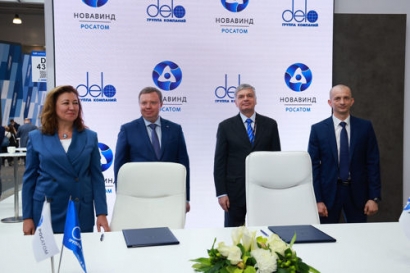 One of the first steps this agreement provides for is the supply of electricity generated from wind energy to the largest terminals in the Azov-Black Sea region of Russia: NUTEP Container Terminal LLC and KSK Grain Terminal JSC in Novorossiysk (both are a part of DeloPorts LLC, a stevedore asset of the group.

Atomenergopromsbyt, part of NovaWind, the wind energy division of Rosatom, acted as a partner in the project.

According to the agreement, from January 1, 2022, the terminals will be powered entirely by wind-generated electricity.

KSK and NUTEP became the first large port infrastructure facilities in Russia to announce a switch to renewable energy.

“Rosatom is consistently implementing a strategy for low-carbon energy production based on nuclear and wind power. Currently, more and more companies are choosing the path to sustainable business development. In many ways, it becomes the key to competitiveness and long-term commercial success. And I hope that today's agreement is only the first step towards the switch of enterprises in the Russian logistics industry to low-carbon energy sources,”  Lyakhova said.

The annual handling capacity of NUTEP is 700,000 twenty-foot equivalent units (TEUs), the container turnover of the terminal in 2020 reached 487,000 TEUs. The share of NUTEP in the container turnover of the Azov-Black Sea basin is 61%, in Russia – 9%. The terminal's customers include the largest international lines. The handling capacity of the KSK grain terminal is 6 million tons per year (up to 7 million tonsafter the reconstruction is completed in 2021); in 2020, the terminal handled more than 5.1 million tons of grain. The share of KSK in Russian grain exports in 2020 was 12%.

The "green port" project will enable the use of electricity generated from low-carbon energy sources (RES) to facilitate exports from the Russian Federation with minimal CO2 emissions, which, in turn, will affect the reduction in NUTEP and KSK's estimate indicators in reporting on indirect greenhouse gas emissions  and other indirect carbon emissions for their customers. Depending on the methodology adopted by the European Union, the indicators could reduce the "carbon tax" on exports to the European Union for Russian exporters.

According to NovaWind, the potential reduction in CO2 emissions due to NUTEP and KSK switching to wind energy will amount to 6.8 and 5.7 thousand tons of CO2 per year, respectively when compared to traditional sources of electrical energy, provided that they are based on burning natural gas.

“One of the strategic objectives of Delo Group is the development of port and terminal infrastructure in accordance with the principles of sustainability and minimal impact on the environment. The green port project at DeloPorts enterprises is a pilot project, but long-term one. We intend to expand and develop it at other enterprises of the group. The NUTEP and KSK terminals are the most advanced in the South of Russia; we are implementing a large-scale investment program aimed at expanding capacity and purchasing the latest equipment in order to update them. We strive to comply with ESG (Environmental, Social, and Governance) principles and are grateful to our partners at Rosatom for their help and assistance with the green port project,” Delo Management Company CEO Igor Yakovenko commented on the agreement.