Friday, 27 May 2022
0
REM
Mayflower Wind the developer of an offshore wind lease area located off the coast of Massachusetts announced that its 20-year, power purchase agreements to supply the Commonwealth’s three largest utilities for 1200 megawatts of clean power were filed with the Massachusetts Department of Public Utilities. Mayflower’s wins under the 83cII and 83cIII solicitations were merged for a single delivery, as its SouthCoast Project, at its interconnection point at the site of the former coal fired power plant at Brayton Point in Somerset, Mass. 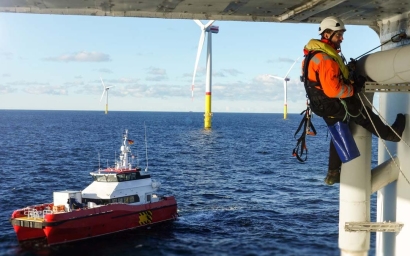 DPU approval of the PPAs will trigger the release of Mayflower’s 20-year commitment to expend $119.8 million on economic development investments that will support ports and infrastructure improvements, training and education, applied research and marine science, and support for low-income electric consumers among other initiatives. Policies supporting diversity, equity and inclusion are implemented across all the investment programs, as well as specific initiatives that include the hiring of firms owned by and/or committed to supporting minority and underrepresented communities.

Michael Brown, CEO of Mayflower Wind noted the commitments made by his company are tangible investments.

“Mayflower Wind has binding agreements with more than 10 organizations in the region,” said Brown. “Mayflower’s economic development commitments will be distributed throughout the SouthCoast and beyond to help deliver positive economic change and social justice, foster local workforce and supply chain development, and meet the Commonwealth’s goals for clean, renewable energy,” he added

“Mayflower Wind’s nearly $120 million commitment will not only further strengthen the partnership between the offshore industry and our region, but it will also support and increase education, skills training and workforce development opportunities for our residents and businesses, and I am excited about the lasting impact this investment will have on our region and our communities as we work to create clean energy jobs and achieve net-zero carbon emissions by 2050.”

Leonard M. Lee, President and CEO of the SouthCoast Community Foundation, whose organization is set to receive $27 million in funding from the company over the next 10 years, said Mayflower Wind’s investments will positively impact the nonprofits his organization serves.

“The value of Mayflower Wind’s commitment to the South Coast cannot be understated,” said Lee. “The SouthCoast Community Foundation is excited to partner with community leaders and organizations to begin the work of developing an offshore wind workforce and bringing those opportunities equally to all members of our region,” he added.

Mayflower Wind’s $120 million in economic development investments are the combined result of its 2019 Massachusetts offshore wind procurement, 83CII win for 804 megawatts and its December 2021 400 MW procurement win under MA 83CIII.

Mayflower Wind’s 83CII proposal originally called for injecting that power into the electric grid via an interconnection in Falmouth, Mass., on Cape Cod. But given the Commonwealth’s need to get this power delivered sooner than later, Mayflower is seeking approval to shift delivery of that 800 MW to its interconnection site at Brayton Point.

“With scarce interconnection capacity in the New England grid, getting 1200MW of contracted capacity into a secured location is a monumental achievement” said Bob Rio, Senior Vice President at Associated Industries of MA. “Time is of the essence in addressing this issue in order to meet our greenhouse gas reduction goals,” he added.

Brown added, “Mayflower Wind is proud to be supporting the Commonwealth’s development of a vibrant offshore wind industry, one that will deliver clean affordable energy to residents and businesses throughout Massachusetts. We are also looking forward to further strengthening our many partnerships, investing in local communities and becoming a strong engine for economic and workforce development on the SouthCoast.”

Subject to future investment decision, the company will construct wind turbines in federal waters in the Atlantic Ocean. When operational in the late-2020’s the first 1200MW of the project will produce enough electricity to power nearly half a million homes annually and eliminate 13 million metric tons of greenhouse gases over the life of the project.

Mayflower Wind’s outreach office is in Fall River, close to their new O&M port and a short commute to the home dock of its crew transfer vessels on the New Bedford waterfront. The company continues to plan for a second interconnection point for future procurements in Falmouth, Mass.