Tuesday, 19 May 2015
0
A new report by the US Department of Energy (DOE) finds that advanced wind turbines could bring wind energy to every state in America. 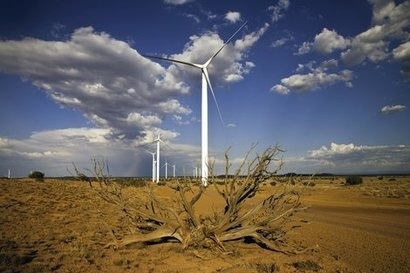 The Enabling Wind Power Nationwide report explains how new turbine designs are putting strong, consistent winds within reach. Secretary of Energy Ernest Moniz announced the report during a keynote speech at the WINDPOWER 2015 Conference and Exhibition in Orlando, Florida.

“Wind generation has more than tripled in the United States in just six years, exceeding 4.5 percent of total generation, and we are focused on expanding its clean power potential to every state in the country” said Energy Secretary Ernest Moniz. “By producing the next generation of larger and more efficient wind turbines, we can create thousands of new jobs and reduce greenhouse gas emissions, as we fully unlock wind power as a critical national resource.”

The report builds upon the DOE’s Wind Vision: A New Era for Wind Power report released in March, which shows how wind energy can become one of America’s top electricity sources with cost reductions for customers.

American Wind Energy Association (AWEA) CEO Tom Kiernan pointed out some of the ways in which Americans can benefit from a wind resource that could potentially meet the country’s electricity needs 10 times over and largely untapped. More than 1000 wind turbines across the US are already accessing higher wind resources, with towers reaching 100 meters or more above ground rather than the standard 80 metre tower. Heights of 120 meters are already common in Europe and at 110 metre heights DOE expects the land area with physical potential for wind deployment in the US to increase by 54 percent. At 140 metres the potential wind resource would increase by 67 percent. Raising hub heights to 140 metres and lowering specific power would open up an additional one-fifth of the land area of the United States for wind turbine locations, lighting up many parts of the country, especially the Southeast US.

These new turbines could bring economical wind deployment for the first time to states such as Alabama, Arkansas, Connecticut, Georgia, Kentucky, Louisiana, Mississippi, North Carolina, South Carolina, and Virginia. These states currently have no commercial wind turbines. Additional areas of Michigan and Minnesota could also be opened up for development. The potential growth in the Southeast will build on to an already strong wind supply chain and create well-paying construction and operations jobs.

Longer blades, improved siting techniques and other factors are already making high wind resource areas even more productive while some older sites are being repowered by new turbines. New innovation has contributed to a drop in the price of wind-generated electricity with the levelized cost of energy (LCOE) dropping 58 percent in just five years, according to a study by Wall Street financial advisory firm Lazard.

US Department of Energy (DOE)