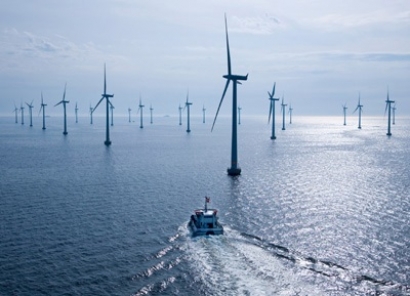 The proposed sale notice for leases on nearly 390,000 acres will be published in the Federal Register on Wednesday, April 11. The notice of sale "for commercial leasing for wind power on the outer continental shelf offshore Massachusetts" will include a 60-day public comment period.

Speaking in Plainsboro, New Jersey, Friday afternoon, Interior Secretary Ryan Zinke said the proposal is part of the administration's "all-of-the-above" energy policy and is evidence the White House is intent on "using every tool available to achieve American energy dominance."

"The proposed sale area has tremendous offshore wind energy potential and the responsible development of it continues to play a big role in the Administration’s America-First Offshore Energy Strategy,” Zinke said. “This area represents the Department’s willingness to listen to stakeholder feedback, including the fishing community, and make the right adjustments.”

The announcement comes two days after the Federal Bureau of Ocean Energy Management issued a call for input on a "path forward for future offshore renewable energy leasing on the Atlantic."

“The outlook for offshore wind is bright and today, we are taking the next step to ensure a domestic offshore wind industry," said Vincent DeVito, Counselor to the Secretary for Energy Policy.

In a notice published in the Federal Register Friday, the agency said it is assessing which geographic areas along the Atlantic are the most likely to have highest potential for successful offshore wind development.

In doing so, the bureau says it looks at such factors as areas being greater than 10 nautical miles from shore; shallower than 60 meters in depth; adjacent to states with offshore wind economic incentives; and areas where developers have already expressed interest in deploying wind energy assets.

In regard to the proposed sale of leases off the Massachusetts coast, DeVito said the initiative was the result of extensive work with officials in the Commonwealth and "a broad community of engaged stakeholders."

“Together, we identified areas that can support a large-scale commercial wind project, while minimizing the impacts to fishing habitats, marine species, and other uses of the outer continental shelf,” he said.

The Interior Department said it expects two different groups to respond to the notice of proposed sale: developers who have already been qualified for commercial wind energy development offshore Massachusetts, and those who wish to be qualified.

BOEM will host a public seminar to describe the auction format, explain the auction rules and demonstrate the auction process through meaningful examples.

It will be followed by a public meeting on BOEM’s planning and leasing efforts regarding Massachusetts offshore wind energy activities. The time, venue, and related materials for the seminar and public meeting will be posted online.

Friday's announcement represents a marked about face for both Zinke and President Donald Trump.

As far back as 2014, the future president was taking to Twitter to blast wind energy.

For example, on Sept. 9, 2014, Trump wrote, "Windmills are the greatest threat in the US to both bald and golden eagles. Media claims fictional ‘global warming’ is worse."

Zinke's criticism of the wind energy sector continued into last month. On March 7 he told attendees at the CERA Week energy conference in Houston that while it's true "oil and gas and coal have a consequence of carbon" the "carbon footprint of wind is significant."

“We probably chop up as many as 750,000 birds a year with wind,” Zinke added. “I always thought the best place for wind was on the roof of a house.”

He also panned solar energy, saying it takes land out of use for recreation and hunting.

Zinke's claims were rebuffed by the web news site Axios, which published a fact check of his statements.

Among other things, Axios found that over their life cycles, wind turbines generate only up to 3 percent of the greenhouse gas emissions that coal does and 7 percent of the emissions of gas-fired electricity.

Further, the U.S. Fish & Wildlife Service, an agency of  Zinke's Interior Department, said that based on the most "statistically sound estimates" available, the number of birds killed by wind turbines falls somewhere between 134,000 and 437,000 a year.

By comparison, a 2012 Bureau of Land Management memo estimates that 500,000 to 1 million birds die each year in oil fields.

In an interview with Ecowatch, Garry George, Audubon's Director of Renewable Energy, said, "Wind turbines kill an estimated 140,000 to 328,000 birds each year, but the biggest threat to birds is climate change. More than half of the bird species in North America could lose at least half of their current ranges by 2080 due to rising temperatures.”