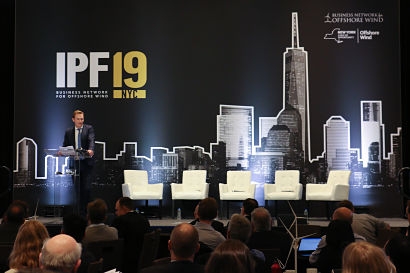 Attendees from across the globe, including Europe, China, Mexico, Canada, and the US, heard 30 expert speakers and provided feedback on time-sensitive information affecting the offshore wind industry.

The Network’s IPF Virtual (also known as the International Partnering Forum), featured leading government regulators seeking input from the industry. Jim Bennett, chief, Office of Renewable Energy Programs, Bureau of Ocean Energy Management (BOEM) told participants that the overall demand for offshore wind energy is high and growing, and that the industry is mostly on course to maintain its rapid development.

“Offshore wind energy will make a major contribution to this country’s economic revival in the coming months and years” said Liz Burdock, President and CEO of the Business Network. She added that lowering IPF’s carbon footprint was a fitting way to celebrate the 50th anniversary of Earth Day. “The silver lining of our current circumstances is the over 119,000 pounds of carbon emissions saved on air travel, hotels, and food.”

States from Massachusetts to Virginia have already made major commitments to offshore wind energy, led by New York Gov. Andrew Cuomo’s commitment of 9 gigawatts (GW) by 2035 and New Jersey Gov. Phil Murphy’s commitment by 7.5 GW by then. Speakers addressed challenges that the US industry must overcome to get there, including some related to the coronavirus pandemic:

On permitting, James Bennett said that the US Interior Department of Bureau of Ocean Energy Management (BOEM) employees have not been hindered by teleworking, and the much-anticipated Environmental Impact Statement for the Vineyard Wind 1 project is on track to be done by the end of the year. Stakeholder input can be gathered through videoconferencing and written comments, he said; in-person events are not required. Burdock said that with timely action by the federal government on seven pending permit applications, as many as 10 GW can be built by 2030.

On acceleration of jobs and investment, tens of thousands of American jobs and billions of dollars a year in private investment would swiftly follow final action on the permits. “That economic boost could come at a very timely moment for the US economy” said Matthew Palmer, vice president, Offshore Wind Manager, WSP.

On obtaining leases,  Bill White, president and CEO of EnBW North America, said that fulfilling on governors’ ambitious commitments to offshore wind will require opening more areas for leasing. He expressed concern that there will not have enough bidders for offshore wind energy solicitations in 2020, 22, 24, 26 and 28, if BOEM holds too few auctions in the region. The lack of competition problem gets worse over time if these auctions don’t take place, he said, and could affect the entire East Coast.

On attractive pricing, John Dalton of Power Advisory said pricing for ratepayers is key and that these costs have been coming down in recent agreements. Philipp Beiter, Energy Markets and Policy Analyst for the National Renewable Energy Laboratory, predicted the levelized cost of power from floating turbines, too (such as would be used off the West Coast), could fall as low as $53-$74/MwH by 2032.

On transmission bottlenecks, Eric Hines, director of the Offshore Wind Energy Graduate Program at Tufts University, noted that a tremendous amount of offshore wind power is already in the queues for the regional electric grids, with more to come, and that utilities must start preparing for this volume. He presented two scenarios, one with an offshore grid backbone, and one without it.

The next US offshore wind turbines will arrive soon. Virginia utility Dominion Energy Inc. announced yesterday that it will soon start construction on its two-turbine demonstration project, using components en route from Denmark and Germany via Canada. They will be the first since five were built off Block Island, Rhode Island, in 2016.

“This is a monumental step toward the installation of the first offshore wind turbines in federal waters, which will deliver clean, renewable energy to our customers” said Mark Mitchell, Dominion’s vice president of Generation Construction, in a statement. The utility has partnered with Ørsted on the project, to be completed this year.

Off the West Coast, virtually all the sites will be developed with floating wind turbines anchored in up to 1,300 meters of water. Chris Potter of the Ocean Protection Council moderated a wide-ranging discussion on the potential in California, Oregon and Hawaii. It covered future statewide commitments by California; the closely watched BOEM auction of the Morro Bay Wind Energy Area; negotiations with the Department of Defense; and “make-or-break” transmission issues.

Other sessions covered developments in resource assessment such as with Lidar buoys; underwater inspections by divers and increasingly, by Remotely Operated Vehicles (ROVs); hiring practices, worksite safety, and job opportunities for engineers and surveyors.

Next up, the Network is hosting “Pitch and Brew” events that will connect individuals in the industry virtually by video and phone calls.