Monday, 22 August 2011
0
REM
Abengoa Bioenergy has been selected by the US Department of Energy’s Loan Programs Office to receive an offer of a conditional commitment for a $133.9 million federal loan guarantee for the construction of its “first of a kind” commercial scale biorefinery facility to produce renewable liquid fuel from earth’s most abundant organic feedstock source – plant fibre, or cellulosic biomass. 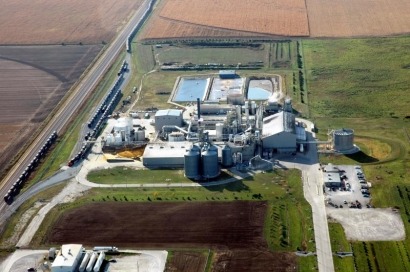 Upon successful satisfaction of the conditions precedent and approval of the loan guarantee, we expect DOE to issue a guarantee of the loan from the Federal Financing Bank up to the amount ultimately approved by DOE. With the offer of a conditional commitment now received, Abengoa Bioenergy has announced that they intend to start construction on the site, which is located near Hugoton, in Stephens County Kansas, in the very near future.

“Abengoa has been developing this technology for 10 years, and the project itself has been in the development stages for over 5 years,” said Manuel Sánchez, CEO of Abengoa. “In preparation for construction of the Hugoton project, the company has developed and perfected its proprietary technologies and produced cellulosic ethanol for thousands of hours from laboratory scale, to a biomass pilot plant facility in York, Nebraska, and ultimately from a demonstration scale facility in Salamanca, Spain. As a result, we are very pleased to finally achieve this financing milestone, and we thank the Department of Energy’s Loan Programs Office for their offer of a conditional commitment, that if realized will allow us to construct one of the first commercial scale biomass conversion plants in the world,” Sánchez continued.

The US Department of Energy has been a supporter of Abengoa Bioenergy’s efforts to develop new ethanol production technologies since 2003. The Department’s Office of Energy Efficiency and Renewable Energy’s Biomass Program originally supported the construction of the Abengoa pilot plant in York, Nebraska with a $34 million cost matching award, then entered into a cooperative agreement with Abengoa Bioenergy in 2007 to provide up to $100 million towards the construction of the commercial facility in Hugoton, as one of six second generation biofuels facilities chosen for support in the DOE’s biofuels initiative.

“After we demonstrate the commercial viability of our proprietary enzymatic hydrolysis technology in Hugoton, we then plan to incorporate the technology into many of our other existing facilities by adding cellulosic production to the existing starch ethanol facilities that we currently operate. The new cellulosic ethanol plant will pave the way for the next generation of biofuels, which will be even more energy efficient and environmentally friendly, and will help lead the US to a cleaner, more secure energy future. Additionally, the fact that this facility will bring an estimated 300 new direct jobs to the area, and an annual plant payroll over $4.5 million for 65 full time jobs at the facility, provides a critical economic benefit to the town of Hugoton, and in fact to the entire state of Kansas,” said Javier Salgado, President and CEO of Abengoa Bioenergy. “The plant is also designed to produce approximately 23 million gallons of advanced cellulosic ethanol each year, as well as enough energy to meet the electric power needs of the plant,” Salgado continued.

Abengoa Bioenergy is a subsidiary of Abengoa, S.A., and is the largest European ethanol producer, one of the largest producers in the USA, and the only worldwide bioethanol manufacturer with production facilities on three continents. Abengoa Bioenergy maintains its corporate offices in St. Louis, Missouri, operating ethanol production facilities with a worldwide capacity of 840 million gallons per year in the US, Europe, and Brazil. With over 380 million gallons of this capacity located within the US, the company has facilities in Missouri, Kansas, Nebraska, Indiana, Illinois, and New Mexico, and is also a leader in the development of new technologies for production of cellulosic ethanol.