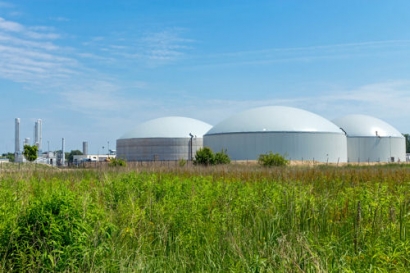 Macquarie Capital’s investment will fund the end-to-end construction of the plant, which is expected to begin injecting green gas into the UK’s national gas network by early 2022. It will become part of Macquarie Capital’s existing Adapt Biogas portfolio - doubling its capacity of gas to grid biomethane. The combined portfolio will produce enough energy to cover the annual gas consumption of over 5,600 UK homes.1

The Evercreech plant will be constructed on an industrial estate in Somerset, in the South West of England and support the nearby residential population, as well as more than 400 local dairy, brewing and baking manufacturers with a less carbon-intensive waste disposal service. Once fully operational, the plant is expected to save 95,000 tonn of food waste from landfill each year - the equivalent to food waste produced by over 400,000 homes in the UK annually.2

Macquarie Capital’s investment comes amid growing demand for biomethane as an increasingly important part of the UK’s energy mix - providing much needed growth capital to a sector known for its operational and supply chain complexity. The Evercreech investment follows Macquarie Capital’s 2019 majority acquisition of the company now known as Adapt Biogas, a leading UK-based provider of O&M services, capital, and a strategic partner to new and existing anaerobic digestion plant owners.

Since 2009 Macquarie Capital’s Principal Finance team has provided financing and investment capital for over 700 companies, deploying over £26 billion globally. In the last 12 months the team committed almost £3 billion.

Patrick Ottersbach, a Managing Director at Macquarie Capital Principal Finance said, “We have been at the forefront of financing innovative developments in the anaerobic digestion sector since establishing our platform in late 2019. Since then, we have supported Adapt Biogas by providing our expertise and the capital they need to achieve their growth ambitions. The addition of the Evercreech plant to the platform is a significant step towards realising those ambitions and becoming an important part of a growing sector that is expected to play a critical role in the UK’s plans to reach net zero.”