Tuesday, 03 January 2012
0
Toby Price
The Himalayan nation of Nepal has found it has become an expert in using cow dung to produce biogas, and is now sharing its knowledge with other countries around the world. It has installed over 200,000 biogas plants serving close to 300,000 homes across the country. 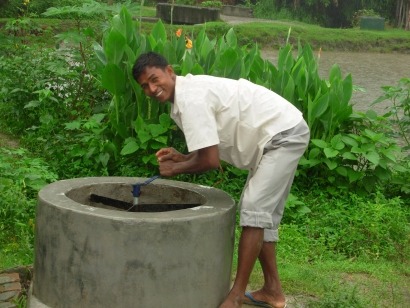 Nepal is a poor country which, due to its altitude, also lacks a decent conventional source of heat freely available in other developing nations - timber. Consequently, its population has long become accustomed to using dried animal dung as a source of fuel.

In more recent years, the Nepalese have also begun to use animal dung to generate biogas for cooking in rural areas and for lighting houses. Since 1992, local communities have been building biogas plants with the financial and technical assistance of the Netherlands Government/SNV-Nepal, the German government (KFW) and the Government of Nepal.

In 2003, the Nepalese government in conjunction with a number of non-governmental organisations and several benefactors also established the Biogas Partnership Project Nepal (BSP-N), which has already installed over 200,000 biogas plants serving close to 300,000 households across the country.

At the same time as providing heat and lighting, it is estimated that this project is reducing greenhouse gas emissions by 7.4 tonnes per household per annum.

Over the last decade Nepal has gained valuable know-how in the development of biogas plants and according to a recent report by Navin Singh Khadka, BBC News’s environment reporter, a number of Nepalese experts have been travelling to countries in South East Asia and Africa to introduce biogas technology there. Countries including Cambodia, Laos, Vietnam, Indonesia, Bangladesh and Bhutan, among others in Asia and around 10 countries in Africa have benefitted from the knowledge shared with them by Nepal.

The Nepalese biogas programme was even awarded the prestigious Ashden award back in 2005 for raising the living standards of the people living in the rural areas of Nepal with clean and reliable energy through the promotion and successful use of biogas. The money from the award was used by BSP-N to construct rain water harvesting tanks for houses in hilly areas that are facing water shortages, since biogas plants do not function without a constant supply of water. According to BSP-N, a total of 421 households have benefited from rain water harvesting tanks acquired using the prize money from the Ashden Award for Sustainable Energy, enabling them to install biogas plants.

Under the guidance and coordination of Alternative Energy Promotion Centre of the Nepalese Ministry of Science and Technology, there are 86 biogas construction companies employing more than 12,000 people working on the BSP-N, while institutions such as the Agricultural Development Bank, Rastriya Banijay Bank, Nepal Bank Limited, other development banks and micro finance institutions are providing loans for biogas.

The BSP-N also reveals that carbon emissions avoided through biogas plants are being traded on international carbon markets through the Clean Development Mechanism, to fund the programme in the future.

"Nepal was the pioneer in the development of this technology and now it has also been successful in sharing its technical expertise with many countries," Rem Neefjes, the country director of SNV, the Netherlands government's development agency, told BBC News.

Nepalese experts are not only helping African communities to install biogas plants, but are also providing training. Navin Singh Khadka explains in his report that Theoneste Kaneruka was a simple mason in the northern province of Rwanda until three years ago when he received training from the Nepalese expert Prakash Ghimire. He then started up his own company and now builds 20 to 25 biogas plants a month.

"BSP-N was regarded as an inspirational example and many stakeholders from other countries made a visit to Nepal not only to witness biogas households but also to learn from key stakeholders how the sector had been developed," comments Wim J van Nes, renewable energy network leader of SNV.