Monday, 09 December 2019
0
REM
With a $1 million grant from the U.S. Department of Energy, the Cockrell School of Engineering is launching a unique initiative that aims to make The University of Texas at Austin a national hub for geothermal energy expertise and startups. 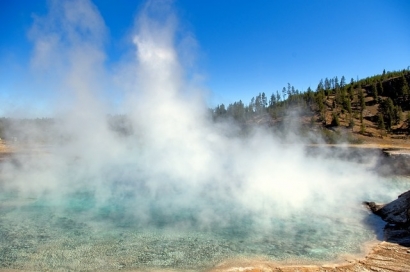 The new Geothermal Entrepreneurship Organization (GEO) will bring together engineers, researchers and entrepreneurs to develop technologies and launch companies to help advance the geothermal energy industry.

The organization, led by Jamie Beard and Bob Metcalfe of the Cockrell School’s Innovation Center, aims to leverage areas of excellence in geosystems and drilling engineering at UT to spur geothermal technology development and maturation. The effort will engage all groups with relevant expertise within the Cockrell School, UT’s Jackson School of Geosciences, the Bureau of Economic Geology, the College of Natural Sciences and the university’s more than 20 energy research centers. Beard and Metcalfe plan to complement that expertise with the vast community of entrepreneurial talent across campus and in Austin.

“It’s a straightforward concept. Drilling technically complex, high-temperature and high-pressure wells is a core strength of the oil and gas industry. Let’s use all of that learning and expertise to drill for heat — tapping a vast CO2-free, clean energy source,” Beard said.

Geothermal energy is produced by converting heat emanating from the Earth’s core into electricity. Countries such as Iceland, where there is heavy volcanic activity, have been using geothermal energy for over a century. But they can access geothermal heat sources with relative ease because very high temperatures are encountered close to the surface. UT’s GEO is focused on developing and commercializing advanced high-temperature and high-pressure drilling tools that will enable geothermal energy production worldwide, which means developing drilling technologies that can economically reach depths of up to 30,000 feet and operate at temperatures exceeding 350 degrees Celsius. The goal is to enable reliable production and use of geothermal energy anywhere in the world.

Much of the expertise at UT needed to develop the necessary drilling tools, technologies and methodologies lies in the Cockrell School’s Hildebrand Department of Petroleum and Geosystems Engineering.

“Geothermal energy offers an avenue for oil and gas companies to reinvent themselves as sustainable energy providers, while doing what they do best — drilling the most difficult wells in the world,” said Eric van Oort, a professor in the Hildebrand Department and a co-investigator in GEO.

During the past few decades, other renewable energy sources, like wind and solar power, have been growing steadily in the U.S. Relatively low-cost advances in technology have allowed producers in both sectors to increase market share through economies of scale, driving consumer prices down enough to compete with conventional energy suppliers such as oil and gas. But breakthrough innovation in the geothermal space remains stagnant.

The GEO will foster an entrepreneurial ecosysytem in tandem with focused research so that new tools can make it to market efficiently and industry can start making progress quickly.

“We have to be sure that relevant technologies get field-tested and quickly commercialized,” said GEO’s principal investigator Bob Metcalfe. “The ‘valley of death’ that technologies experience when they emerge from research labs is deep in the context of drilling technologies, because the technologies need to be relatively mature before they can be field-tested. That makes startups and commercialization an essential part of our effort. We will create clusters of geothermal startups based on technologies developed at UT to infuse the industry with fast and impactful innovation that is mature enough for industry to immediately leverage.”