Thursday, 29 September 2022
0
REM
First Hydrogen announced it is advancing its European Union strategy with expansion in key European countries. This strategy is supported by the European Parliament's decision to commit to ambitious binding renewable targets and simplify the regulatory framework, with green hydrogen at the center of this commitment. 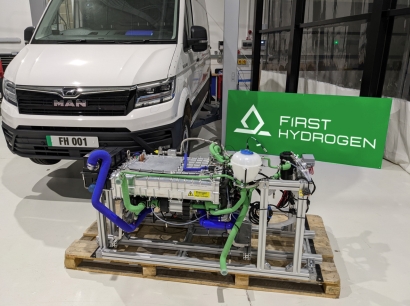 The new initiative will focus on identifying and signing up fleets with interest in participating in the planned European trials of the First Hydrogen Light Commercial Vans expected to commence early 2024 in Germany and France. Green hydrogen production opportunities will also be identified and developed in addition to reviewing national distribution network plans in order to identify First Hydrogen's opportunities to contribute to any planned national networks.
The European Parliament has voted in support of achieving an overall renewable energy contribution of at least 32% of the total energy mix by 2030. It will achieve a supply of 20 million tonn of green hydrogen by 2030, with 10 million tons produced in the EU – agreed within a binding commitment – and a further 10 million tons imported. In addition, for the transport sector, greenhouse gas intensity reductions of at least 16% have been set to be achieved by 2030.

In order to ensure that green hydrogen production can start immediately, European Union Commission President Ursula von der Leyen in her state of the union address announced the creation of a new European Hydrogen Bank. In her statement she argued that "hydrogen can be a game changer for Europe", and we believe that the €3bn budget – from the existing Innovation Fund – will be a good starting point, however we will be working to leverage that amount to ensure we move our hydrogen economy from niche to scale."

The EU markets represent some 35% of the Global Light Commercial vehicle market, with the largest EU market shares in Germany (19%), France (28%), Italy (11%) and Spain (11%)1.  On green hydrogen production, in addition to the recent announcements, so far, the EU has announced approximately €75 billion of investments in the sector.

Nicholas Wrigley, Chairman of First Hydrogen UK, says, "The European Union policy framework and commitment to hydrogen is now in place and represents a significant opportunity for First Hydrogen's total solution business model of providing fleet vehicles and hydrogen as a service."
Steve Gill, CEO of First Hydrogen Automotive, says, "We are able to quickly move into Europe by harnessing the expertise of our senior executives based in the EU and leveraging the work already competed in the UK with our initial demonstrator vans. Similar fleet trails are planned in the EU as planned with multiple major fleet operators in the UK. Our vans are offering industry-leading range, rapid refueling and performance."
Robert Campbell, CEO of First Hydrogen Energy, says, "We are very encouraged to now see such strong support for green hydrogen in Europe and North America. These developments underpin our business plans for years to come."
Add a comment Subscribe!
electric/hybrid