Friday, 01 July 2011
0
Dan McCue
People tend to refer to Saul Griffith as a wonderkind. A 2007 recipient of a MacArthur Foundation “genius” grant, the tireless Australian-born engineer and inventor seems to have no “off” button. At the age of 37, he’s already co-founded numerous companies, spoken at the world’s most prestigious conferences, and brought into being a slew of new devices and materials. 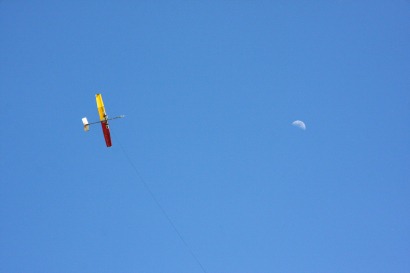 Right out of college – Griffith holds a Master of Engineering degree from the University of Sydney and a Ph.D from MIT – he developed an inexpensive technique for making prescription eyeglasses using two flexible surfaces and a pourable resin, and his endeavors since have included deep “doing” in a myriad of industrial design and scientific settings.

But it’s what he’s had to say about energy, renewables and climate change that’s proven most dazzling to those who have attended his presentations or watched archived segments online.

According to Griffith, if the world of our children and grandchildren is going to continue to look and function much as ours does today, we’re going to need to build three terawatts of zero-carbon energy by mid-century.

It’s a task that he readily acknowledges is a “huge undertaking” and a goal that we’re “nowhere near on target to achieve,” he says.

Hoping to inspire a mass movement to head off catastrophic climate change, Griffith co-founded WattzOn, a personal calculator that allows users to track energy consumption down to the grittiest detail.

Griffith’s also gone headlong into renewables entrepreneurship. Besides co-founding Makani Power, which is developing airborne wind turbines to extract energy from powerful, consistent winds at altitude, he currently has a solar power project in the works – although he declined to discuss it during a recent conversation, saying “it’s not ready to be public yet.”

Now based in San Francisco in the US state of California, Griffith’s straight-forward, no bulls**t manner can sometimes be mistaken for ego, such as when he said he’s “probably one of less than 10 people in the US who have actually done the math on energy systems and climate change.”

But as he continued to speak – in the process giving a recent interlocutor time to conclude he was probably dead on the mark with that prior statement – it was quickly evident that he fails to see any point in thumping his chest and singing his own praises.

“I am an engineer, I’ve started a utility scale wind energy company, and at the moment I’m doing a lot of work on solar energy systems,” he said early on. “I’m doing the work on the ground of making new technologies.

“But I am, maybe, just voracious in wanting to know what reality looks like,” he continued, referring back to his assessment of the world’s energy needs.

“Basically, we started investigating and building tools for looking at how individuals use energy and then built tools for global scale systems understanding,” he said. “In fact, today, we probably have the best set of tools for doing that around – to the point where we are now helping the US Dept. Of Energy build its own version of these tools.”

This is not to suggest that Griffith has always burned with the desire to set the renewable energy and energy efficiency worlds – and their respective status quos – on their ears.

“I would say the environment has been my passion forever, but it wasn’t easy to work in renewable energy when I went to grad school – anywhere. That was only in 1999, but it still really wasn’t on the map,” he said.

“There weren’t too many schools at the time that were doing good programs in new energy technology and the one’s that were really weren’t my bag,” he continued. “Since then, of course, I’ve done a lot of work on energy, but again I’d say it’s my interest in the environment that drives or is at the heart of my energy interest.

“After all, when all is said and done, the environment is the only thing that counts,” Griffith added.

The concept of airborne wind energy is not exclusively Griffith’s, of course; several small start-up companies are working on technologies that is some ways are reminiscent of man’s centuries-long efforts to fly like the birds he saw all around him.

In this case, proponents of the technology hope to liberate the power-generating aspect of wind-energy systems from the current Earth-bound structures to one tethered to light-weight, high flying craft that capture high velocity winds at altitude.

The work of Griffith and his team at Makani Power – work that’s already received $15 million in support from Internet search giant Google and a $3 million grant from the Dept. of Energy – involves an unmanned craft, tethered to the ground, that will fly in large circles.

As illustrated in early, preliminary tests, three rotors on the craft’s wind help lift it into the air, much as propellers lift an airplane; once airborne, the rotors will generate power as the craft makes loop after loop through the air.

“It’s still at the research stage,” Griffith said of the technology, which has been undergoing various flight and flight-systems tests since 2009.

“Everything works as sub-scale models, but the reality is that to build utility scale machines takes many years, and even prototypes cost tens of millions of dollars. These things don’t work on social-network startup schedules,” he said.

“So we’re just doing rigorous, solid work, building the foundational technology,” Griffith continued. “Everything works at sub-scale, and it’s a matter of building those large scale machines, going through the testing and the validation… and getting up to selling real machines to the grid.

So what’s so intriguing about wind power?

“I’m agnostic, you know,” Griffith said. “If you do this sort of thing globally, there are only rally four things that are obviously worth working on and they are solar, wind, geothermal and nuclear.

“Now, of course, there are, to a lesser extent, other renewables – various forms of ocean power and biomass – but I think they will always be lesser-extent players,” he said.

“And to be honest, I think if you are only going to work on iterative stuff, it’s too hard,” Griffith continued, picking up his original train of thought. “The existing players will beat you. So my attitude is, let’s look at all of those things and determine what the outliers are in each of those sectors that might change the economics in a substantive way.

“As it happened, I had enough background in aerodynamics and kites to know that there was an opportunity to look at high latitude wind and potentially get a higher capacity factor and lower kilowatt hour cost electricity by doing higher altitude wind power,” he said.

“Similarly, the stuff I’m doing with solar at the moment doesn’t look like what anyone else is doing – and that’s not because what everybody else is doing is stupid,” he added. “They are doing all the right stuff, but starting where I am now, I am not going to beat them at their game. It’s expensive developing all those things.

“So I am fortunate enough to work in a space that’s looking under the non-obvious, unturned stones, if you will,” Griffith said. “Being [an] independent helps with that process, but being rigorous is what’s most important.”

No interest in subsidized energy

One of the hallmarks of Makani Power’s efforts is that it is striving to create an airborne wind turbine system that will produce energy that will be truly cost-competitive with coal-fired power plants – without subsidy.

“Philosophically, I don’t want to work on any technology that still requires a subsidy, and on top of that, I think that if you are a technologist, you are naïve to think you are going to be able to play that subsidy game better than anyone else,” Griffith said. “It’s not my role in the ecosystem to play that game.

“So I ignore it and just work on trying to make the lowest cost renewable energy system that can be imagined and built,” he said.

With that, the conversation turned to the current economic development climate in the US where scores of communities are trying to emulate what they perceive as the “high tech, high wage” success of the San Francisco Bay area, the Boston suburbs and Austin, Texas.

But what is the current reality of those idolized places?

Speaking of San Francisco and the renewable energy sector specifically, Griffith said there are “more talented young people who want to work on this problem – by a factor of 10 or 100 – than there are jobs to support them”.

“So, we have an excess of people motivated and skilled to work on these problems,” he continued, but he also pointed out that this population of eager workers is “not exactly skilled in everything we need”.

“The problem is, the renewable and clean tech industry isn’t supporting real wages and isn’t supporting enough of these people to work on these things,” he said. “So as a result, you have to make a fairly irrational decision as a 24 year old to go into renewable energy engineering because you are going to earn twice as much working at Facebook or Google.”

But Griffith didn’t dismiss the notions of those who hope to build their economic development dreams around renewable energy and other clean technologies.

“You have just got to pick a very specific part of the problem that you are going to address, and build the solutions for that,” he said. “I mean, the chances of your having a first-tier wind company and a first tier solar company in some of these place is low, but having a component supplier to one of those industries that’s making the best power electronics or the best… something… is a reasonable expectation and I think that can be done in any community. It’s not like you need thousands of people. You really need just dozens, and then choose your battles well.

“The real problem is getting the financing to do it,” he continued. “That’s the harder problem. It’s difficult to get the risk capital to do these kinds of expensive things in places people don’t normally equate with the industry. And renewable energy is just an order of magnitude more expensive game to play than doing software startups.”

How does a Saul Griffith recommend someone try to overcome that hurdle?

“Hmm… I don’t know,” he said. “Hard work. Spend a lot of time in the game. Talk to every one. You’ve got to try to be rigorous and not lie to anyone. Don’t set expectations too high. Tell them how hard it’s going to be and how much it is going to cost. Network well. I can’t give you any journalistically satisfying answer to that question. It’s a lot of stuff.”

Griffith was equally unwilling to provide what he saw as a pat answer to the question of what needs to be done to meet the energy needs of a mid-century world.

“It’s too simple a question for something that requires both complex thought and a lot of very in-depth decision-making,” he continued. “But what I can say with confidence is this: If you sort of answer all of those questions with “roughly like today, with small changes”, then the answer is, ‘Yes, you have to do three terawatts or 3,000 gigawatts of clean energy systems by mid-century to hit what seems to be the consensus climate target and anticipated population demographics.”

Saul Griffith at the TED conference